August 29, 2019 – The latest public opinion survey from the non-profit Angus Reid Institute finds the ethics commissioner’s mid-August ruling that Prime Minister Justin Trudeau committed an ethics violation in his handling of the SNC-Lavalin affair has done little to impede the Liberal Party’s slow climb back into the good graces of voters.

Casting ahead to an expected October vote, 36 per cent of Canadians say they would support the Conservative Party candidate in their riding. Meanwhile, the Liberals garner 32 per cent support – their highest level in the Angus Reid Institute’s 2019 polling.

For the Conservatives, a competitive race in Ontario is a cause for optimism. The party lost Canada’s largest province by 10 points in 2015, but now sits in a statistical tie with the Liberals (36% CPC, 35% Liberal).

The Liberals, meanwhile, appear – at least for now – to have emerged from the dark tunnel that was the SNC-Lavalin scandal, with strong support in Quebec, where voters express a preference for the Liberals over the CPC by close to a two-to-one margin (38% Liberal, 20% CPC). Significantly, the party also appears to be adding more distance between itself and its left of centre competitors, the NDP and Green Party.

That said, while the incumbent party looks to pull even with the opposition CPC, the Prime Minister himself continues to struggle in his attempt to regain the personal appeal he once held. Just 31 per cent of Canadians say they have a favourable opinion of the Prime Minister, compared to 38 per cent for Conservative leader Andrew Scheer (38%). While Green Party leader Elizabeth May remains the most personally popular federal leader (42%), her own favourability has declined considerably compared to early-summer polling. 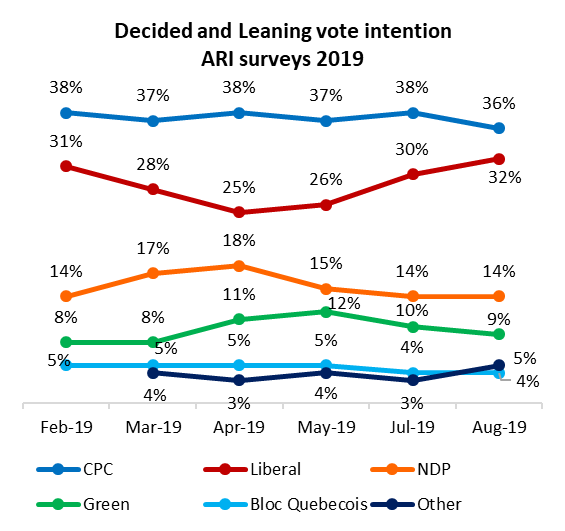