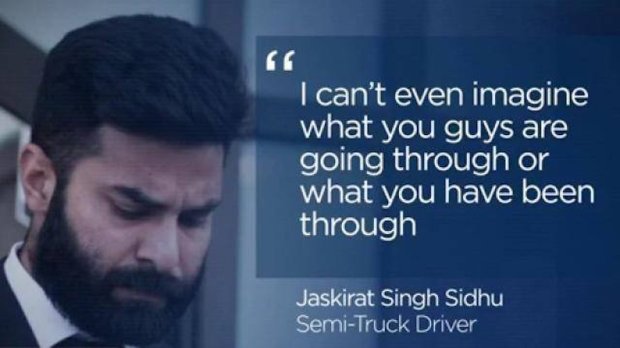 NOT ONE SINGLE PERSON who’s ever gotten behind the wheel of an automobile, I’m willing to wager, has a mistake-free record.

Whether or not we’ve ever received a ticket, there have been times when a split second has been the difference between a close call and tragedy — maybe hitting a pedestrian or crashing into another vehicle.

With each close miss, we breathe a sigh of relief and carry on, but we know if we’d been on the other side of that split second, if luck hadn’t been with us, lives could have been changed forever.

On April 6, 2018, long-haul trucker Jaskirat Singh Sidhu made a split-second mistake that killed 16 members of the Humboldt Broncos junior hockey team and injured 13 others.

He pleaded guilty to all charges and was sentenced to eight years in prison, the longest sentence in Canadian history for a dangerous driving charge that involved neither speeding, impairment nor recklessness.

What happened that late afternoon when his semi was T-boned by the Broncos’ bus at a highway intersection on the Saskatchewan prairie? Sidhu glanced into his rearview mirror to check a loose tarp on his cargo. In doing so, he missed a stop sign and carried on into the intersection where the horrible collision occurred.

Sidhu has fully acknowledged his fault. He has apologized many times. Not a single day will go by when he doesn’t relive the details of what happened that day.

But, as he has done for many months, he now waits anxiously to find out whether he’ll be deported back to India after he finishes his prison term. He and his wife want to stay in Canada.

It’s time for Canada to show this man some mercy. The consequences of his split-second mistake were horrendous, affecting many families; in fact, the entire country. But we must ask ourselves, how would punishing him even more help anyone?