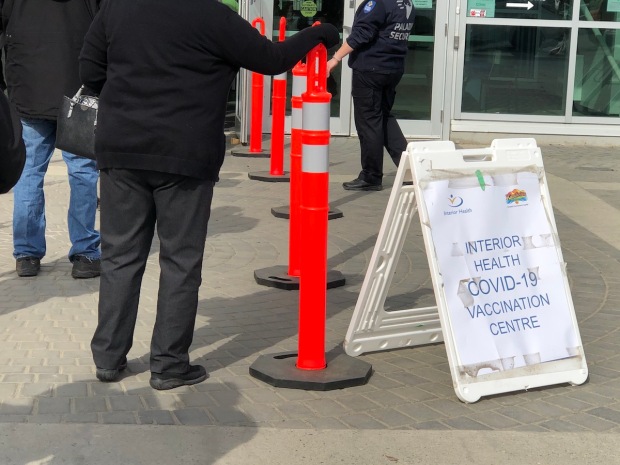 Armchair Mayor column in the works for tomorrow on Rick Eldridge, the popular security guard who lost his job over a videotaped scuffle with a street person on Victoria Street West three months ago….

After last week’s column on Ray Dhaliwal’s upcoming bid for the mayor’s chair, and some thoughts on who, among incumbents, might be making plans, which was followed up with a similar item in KTW, Arjun Singh posted a Facebook comment that “Sometimes the media speculates waaay too early.” From the comments in reaction, not everyone agrees….

So I went in for my second jab after being a good Canadian and printing out a QR code and a confirmation number just like Interior Health told me I must do. When I proudly showed it at the clinic, I was told, “You don’t need that.” Apparently the appointment template has been borrowed from the Fraser Valley authority. So when your turn comes up, don’t sweat the QR code/ confirmation number stuff….

I went in to pay my property taxes the other day but haven’t made application for the Homeowner grant yet, and was yearning for the days when it could all be done in one swell foop instead of the current two-part system. Then Shirley Andrew sent along a note with the same sentiment, saying , “Seems like more and more hassle…”

After Wednesday’s editorial about the issue of publishing the names of mass murderers, Coun. Bill Sarai sent kudos, adding, “We all need to stand up to this unjust treatment of this community. We are one race! The Huma Race!.…”

I had reason to be out on the Trans Canada this week, going from A to B, and the dangerous games that people play out there never cease to amaze me. They tailgate each other at 90 to 100 km/h. Here’s the math on that: at 90, the braking distance is 145 meters; at 100 it’s 173 meters. The average car or truck is between 4.6 and 5.6 meters long. If you’re following two car lengths behind, a sudden stop by the person ahead of you, or some other unexpected event, isn’t going to end well…