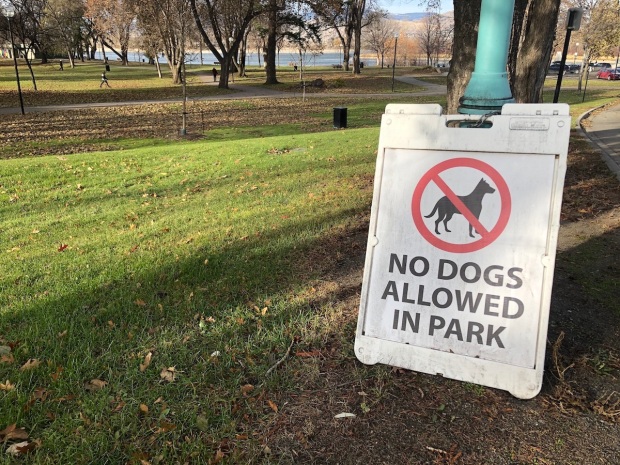 HOW MUCH GREEN SPACE DO DOGS NEED in Kamloops?

The City has plentiful dog parks and earns the label “dog friendly.” Any time there’s a planning discussion you can be sure dogs are part of it. The city boasts 24 off-leash dog parks, 26 on-leash parks and an official off-leash dog beach, namely the popular Pioneer Park.

A new Facebook page called Kamloops Dog Families thinks there should be more. It wants the City to provide more green space for dogs, and the school district to allow dogs under control on school grounds after school hours and on weekends.

The general argument is that dog numbers are rising and the City isn’t keeping pace. Another intriguing argument made by the group is that allowing dogs in more parks, especially Riverside, would reduce the accumulation of Canada Goose poop because the dogs would scare off the honkers.

Allowing people to walk their dogs in more parks would also potentially reduce drug use and drug dealing there, the group contends.

I have to challenge the claim of the group that Pioneer Park is kept clean by dog owners. A lot of people ignore the doggie bags that are provided and just let Fido do his thing wherever he wants. I even saw a dog take a major dump just off shore in the water one day and the owner, who was right beside the animal, kick it further into the river.

Fact is, not everybody is a dog owner or even necessarily likes dogs. Many folks enjoy being able to visit a park without dogs around. That’s why the City prohibits dogs in 18 of its parks, including McArthur Island, Prince Charles and, of course, Riverside.

And yet, a pilot project allowing leashed dogs in Riverside Park would be worth a try. Maybe dog owners would use the privilege responsibly. If it works, it could be tried elsewhere.