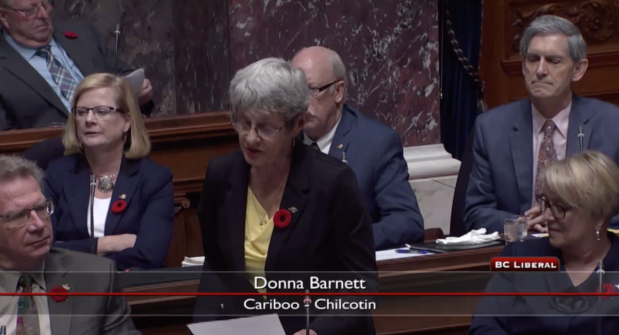 Debate in the B.C. Legislature on Tuesday, Oct. 31, 2017 between Liberal MLA Donna Barnett and Mike Farnworth, Minister of Public Safety and Solicitor General on the issue of paying bills for services provided during the wildfires.

D. Barnett: Yesterday the Minister of Public Safety made it clear in the House that government is unable to pay its bills. If you were to follow his logic, the best way for British Columbians to get reimbursed is to contact their local B.C. Liberal MLA and complain. Members on this side will take no lessons whatsoever from that minister on how to connect with constituents and support them when they are having difficulties.

The minister complains that there are thousands of invoices. That may be the case, but the minister has an obligation as a minister of the Crown to ensure British Columbians affected by the wildfires are taking care of.

My question is to the minister: does he have any way to prioritize which bills get paid, other than files singled out by opposition MLAs?

Mr. Speaker: Members, if we could please hear the response.

You know, that member does work very hard, and it would be nice if her colleagues had enough respect to let me answer her question. What I would like to….

Hon. M. Farnworth: Hon. Member, I can see it’s going to take at least four years to learn to do the level of outrage that I was able to do when I was on that side of the House.

If I may get to the point, which is that as of October 16, all outstanding invoices have been paid, with the exception of a few where additional information is required. Some $462.9 million has been paid out so far this season. So the invoices are being paid, and they’re being paid, in the majority of cases, 80 percent, within 30 days.

Again I would also say to the member that if there are issues, do bring them forward. We will resolve them, in the same way as yesterday when the member for Prince George North contacted my office with an issue concerning a constituent. We got back to them right away. We were able to resolve the issue.

The problem I keep saying to the member is that when she says, “We will bring you the names of the individuals who are having problems” — and fails to do so — we cannot do that.

Yesterday, again, she said to me that she had scores of complaints that she was going to bring to my office. Well, again, as of 10 o’clock today, I had still not received anything.

Our ministry is working extremely hard to ensure that contractors are paid and paid as quickly as possible. The record in the ministry shows that’s taking place, and it will continue to take place.

But what it requires is members to let us know when there is a problem, and we’ll work as hard as we can to resolve it. We have wonderful staff who’ve been working the entire season to do just that and will continue to do just that.