COLUMN — As time has passed since the birth of Sparkling #5 I’ve had time to think about how I would approach writing about it. It’s interesting how time changes what seems important.

I thought I could write about how I was glad there wasn’t an audience of turkeys watching me as I brought the latest wee Sparkling into the world. 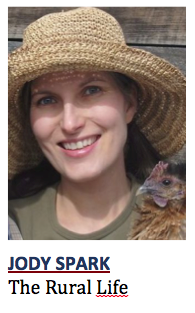 My birthing pool was set up downstairs near the window of our walk-out basement. Under that window are rows of stacked firewood outside where turkeys perch and peer curiously into our downstairs rec room. On hot summer nights Dan would retreat to the futon downstairs and in the morning before he was fully awake, he would have an odd feeling he was being watched. Sure enough, the turkeys were there observing their human.

I was also grateful we were also rooster-less. Somehow we were always blessed to get obnoxious roosters who deem it their duty to stand under our bedroom windows and crow until Dan storms onto the deck to chuck whatever is handy. A cock’s incessant crow isn’t exactly calming background music for labour.

But what was impressed upon me is the uniqueness and advantages of home birth. Here is scene from Sparkling Emergence Part Cinq:

(Mama Sparkling is in birthing pool, active labour, with instinct to ensure environment is secure)

Me: Did Eldest Sparkling let Albright out to pasture?

Have mother hen and chicks been fed and watered?

Yes. Sensitive Sparkling did it this morning.

Has everyone had breakfast?

Where’s littlest Sparkling? Is she alright? Has she eaten?

Have mother hen and chicks been fed?

And so it went until my midwife threatened to line all my Sparklings up in front of my birthing pool to emphatically reaffirm they had full stomachs, the animals weren’t wasting away and littlest Sparkling wasn’t eating tacks.

Of course, this birthing at home with children around business may seem like a burden with unnecessary distractions, and indeed it can be. In my case, it was the way I felt most comfortable. At home and being near to my children is how I’m most at ease. For some, that place of focus and comfort is a hospital.

It’s unfortunate, however, many women in the province don’t have this option, especially in rural, northern and First Nations areas. I was able to access a midwife because I live close to Kamloops, but some are hundreds of kilometres away from a hospital and yet there are no midwives in their communities to deliver prenatal care, birth assistance, or postnatal support.

Midwives are primary health-care providers and their services are associated with fewer hospital admissions, a reduction of interventions, and optimal newborn and maternal health outcomes.

But besides the personal satisfaction of providing care in areas that need it, there’s little incentive for midwives to serve rural areas. It’s difficult for them to get locum coverage, and living in sparsely populated areas means less income.

These challenges can be overcome with better support from the province.

The expansion of midwifery care is urgently needed. The Midwives Association of B.C. has stated it is certain a modest investment in midwifery today will result in a $60-million savings in the health-care system by 2020, and $20 million annually thereafter. At a time when health-care costs are rising and greater burdens on the system are expected, increased funding of midwifery in the province is a no-brainer.

Joanna Nemrava is president of Canadian Association of Midwives and operates a Kamloops-based practice. She says the Canadian model of midwifery care is unique and admired around the world. This model has the potential to be serving women and babies in the provinces much more than it is now.

I was happy and deliciously tired as I lay in bed with my newborn tucked next to me. I watched my midwife gathering all the linens into a bag for washing as Dan started the laundry, then salted his cabbage for kimchee (no time to lose when it’s harvest time, you know).

Has everyone had lunch?