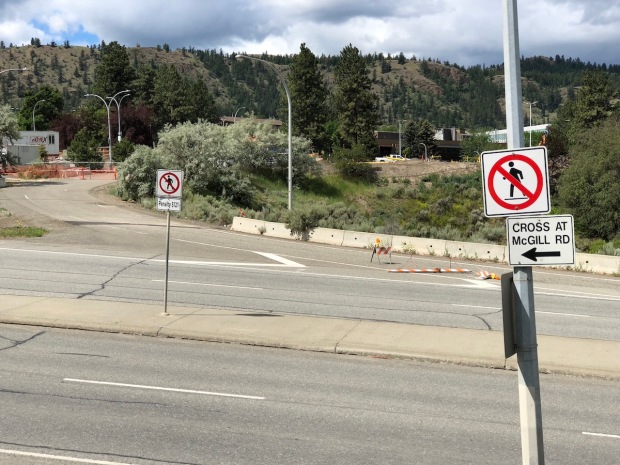 THE IDEA OF BUILDING an overpass over Summit Drive to connect the downtown West End of Kamloops with TRU has been in City plans for 15 years or more.

The recent announcement by the City of Kamloops that they are applying for a funding grant to construct the overpass, in conjunction with TRU, is welcome news.

On Monday, Mel Rothenburger published an editorial stating that building the overpass is ridiculous and that the City should put up a fence in the median which would be cheaper and would force people to cross at the intersection of Summit and McGill. This is the wrong approach if we truly care about the safety of all road users and getting people out of their cars.

The proposed location of the overpass reflects an existing desire line; there are a large number of people who want to cross Summit in this area and many already do at great risk to their personal safety.

The large amount of existing and proposed student housing east of Summit Drive supports the need for the overpass as there are likely over 1,000 students and staff who live in this area. The overpass doesn’t just get people over the road; it takes them into the heart of campus and would shave off about 350 meters in distance between Upper College Heights and Old Main, giving people an alternative to crossing Summit at McGill.

This distance is not insignificant if you are someone who is walking. While a fence would stop people from crossing, what you are really doing is frustrating people who want to walk or ride bikes — which is the opposite of what we need to do to have a more sustainable community.

The overpass would also help to better integrate and connect TRU with the West End and downtown itself. The TRU campus is like an island in the middle of the city bounded by arterial roadways and can feel like a separate enclave. The overpass would not completely solve this issue but would provide another physical connection between TRU and the rest of the community.

The overpass could become a fundamental component of a broader active transportation network in the city that could connect Dufferin and Aberdeen through the TRU campus with the downtown.

This becomes a much more important consideration as e-bikes start to really take off in Kamloops, thereby negating the old excuses about the hills being a barrier to riding bikes here. The downtown-to-TRU campus connection becomes much more accessible for people riding e-bikes with the overpass than without.

While a fence would be a cheaper alternative, it results in the continued prioritization of motorists over people who choose to walk, ride bikes or use other modes of travel — which is the opposite of what progressive communities are doing.

The overpass won’t be cheap but it is a worthy investment. It would be safer, reduce walk times, and would send another signal that our community is putting people who choose to walk, ride bikes or use other modes of travel on a more equitable level with motorists. It would build off the good work done by the City in the last 10 years to build transformative pieces of active transportation infrastructure.

As a North Shore resident, the Tranquille multi-use path was a game-changer for riding a bike downtown. I feel much the same about riding a bike to Valleyview after the interchange project was completed.

In both those cases it seemed like only a matter of time before someone was seriously injured or killed. The same can be said of the current state along Summit. The construction of this overpass is long overdue.

5 Comments on LETTER – Construction of Summit Drive overpass is much needed, long overdue