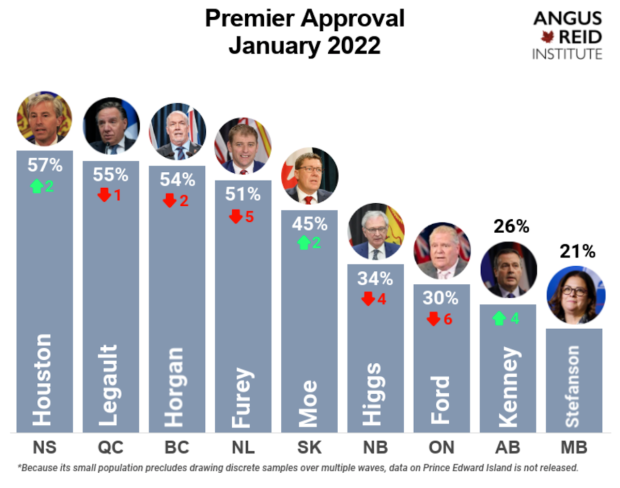 January 17, 2022 – New data from the non-profit Angus Reid Institute finds Ontario Premier Doug Ford down six more points in approval amid frustration in Ontario over his handling of the ongoing COVID-19 pandemic.

Fewer than one-in-three (30%) Ontarians approve of him, marking a new low for his tenure at Queen’s Park. This, as two-thirds of Ontarians (67%) say he has handled the pandemic poorly.

Ford and his Progressive Conservative government are under heavy scrutiny over recent shortages of rapid tests in the province. Three-quarters of residents say the province has done a poor job in distributing tests where they are needed – the highest number in the country. Ford faces a provincial election in June this year.

Each is dealing with a unique public opinion landscape, however, when it comes to COVID-19 policy. While Houston and his government receive top marks on testing and vaccination, majorities in each of the other three provinces say their government has done a poor job in supplying the population with sufficient levels of rapid testing.