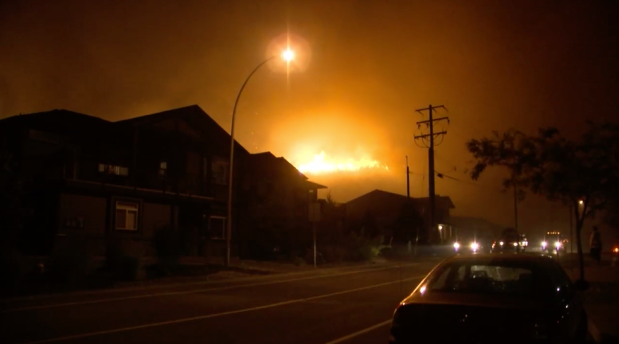 I am writing you on behalf of the Juniper Ridge Community Members to express our great disappointment and disapproval of the interview given this evening by David Trawin on CFJC News. As well as the lack of sense of urgency, understanding and, merely even listening happening in regards to our community’s safety.

Mr. Trawin’s interview was not only inaccurate, the way it was presented was unprofessional and disrespectful to Juniper Ridge residents. Mr. Trawin stated “There’s people that needed to get out and then there’s people who wanted to get out. Those are two different things.”

What Mr. Trawin did not care to make himself aware of prior to the interview that was police were not only knocking on doors in East Juniper asking residents to evacuate, they were also in West Juniper doing the same.

Additionally, many who were coming up the hill stopped to ask police if they needed to evacuate. The police were telling members “Yes” not “only if you live in these areas”. Whilst I understand that Mr. Trawin was referring in his interview to the official evacuation order which stated “The RCMP is carrying out a tactical evacuation for all properties south of Valleyview Drive from River Road to Highland Drive. Properties in Juniper north of Nechako Drive are also currently under tactical evacuation order” it must be understood that based on police feedback and the rapid growth of the fire all residents felt that an evacuation was required for their safety.

At the time of Lytton’s evacuation, it was said by Michelle Nordstrom “the hot, dry and windy conditions in the area could mean the fire is moving at 10 or even 20 kilometers an hour.” Whilst the wind speeds that evening only reached 20km per/h vs. Lytton at 71km/h, without wind it is estimated that a wildfire in grasslands such as that of Juniper fires can spread up to 22 kilometers per hour (in normal conditions, let alone our current “extreme conditions”). Now add the wind from that evening which shifted directions multiple times throughout the evening (see figs 1 & 2).

While not shows on the 2 figures above, there was also a wind advisory in effect the evening of July 1st which suggested winds may fluctuate anywhere from 20km/h up to 70km/h putting us, potentially in the same position as Lytton had been.

It is easy to say after the fact “no one was in danger”, Mr. Trawin. In an interview with the National Post Fire Chief, Steve Robinson actually stated “The blaze in one area had come within 15 meters of houses. Let’s just say I was very concerned. We knew what had happened in Lytton.”

How can you say confidently that people were not in danger when even the Fire Chief himself was concerned? You cannot. No one could have predicted how the fire would spread. No one. Inevitably, people WERE in danger and how dare you state otherwise.

I for one live on Capilano and could see the fire on my doorbell camera and could see the flames getting larger. That sir, is how close the fire was to taking Juniper and many of its residents. Fortunately for the community of Juniper and the firefighters, the wind cooperated in such a way that allowed them to save the approximately 400 houses that were in immediate risk – on the edge of the perimeter.

Had the perimeter moved merely 15 meters in the wrong direction, it is unlikely the fire would have stopped there. Many residents have dry lawns from the heat, and excellent ignition sources such as propane tanks, cedars, and other flammable materials and vegetation.

The vicinity of those 400 homes in East Juniper alone, had traffic backed up within their streets and some residents unable to even leave their driveways. Had the weather acted differently than it did we would be having a very different conversation today. Lytton had approximately 1000 residents and fortunately multiple ways to exit their village. Juniper has over 3,500 residents and only one accessible exit road.

Additionally, in the interview, you stated that “had people been in danger they would have had access to the additional access road”. (I reiterate the above statement.) Once again you are missing some facts. An hour after the fire began radio calls began being made to ask for the gate to be opened. It was chained shut. Now, I don’t know about you, but chain cutters are not a tool I typically travel with.

It should not have taken what could have been a catastrophic disaster to ensure that the gates on either end of the road were opened. The city know that Kamloops is facing its worst conditions ever seen this fire season. So why was this not a priority for a community with only one exit?

Furthermore, it was reported that there was heavy machinery in the way of the road. Juniper residents had to take it upon themselves to not only move cement barriers next to the gate to get vehicles through but also to move heavy equipment.

What we have talked about above up until now is the facts that you missed or did not take the time to educate yourself on prior to speaking during your interview. We still haven’t spoken about your body language during the interview nor your comments that suggested the traffic issues were a result of Juniper Residents.

I work in mental health and have a degree in Psychology. Body language communicates just as much as words do, it gives your words context. Whilst speaking not only was there a smirk as you spoke, you also tilted your head to the side and down as one does while talking to a child or someone “underneath them”.

Your interview told the residents of Juniper that you have no intention on listening to their concerns because THEY are the issue not the lack of exits. You spoke down to the residents and insinuated idiocity on the parts of residents who wanted nothing more than to ensure theirs and their family’s safety.

Stop and think for a moment please Mr. Trawin and Council members, what would you do if you looked out your window or off your deck to see a raging wildfire that was being considered out of control, in weather conditions that only suggested the fire would worsen? Would you stay in your home until someone came to your door?

I often tell my clients and others “until you have walked in someone’s shoes or have been in THE EXACT SAME situation you have no way of knowing how you would feel or react.” This is why you often see hit and runs and the person who ran only ran because they were scared not for lack of caring (this is the result of our brain chemistry and nervous systems, Mr. Trawin). Thus, you have no right to pass judgment on how the residents of Juniper reacted or how it felt to watch a fire burn within your community.

The only way you will know what is needed is by LISTENING to the people who lived through the experience. Yes, the outcome was good, THIS TIME. We may not be so lucky next time. You have 3,000 + residents who are telling you this is an issue. Not just an issue of infrastructure, but an issue that could be the difference of life and death.

How many people are on city council? I’m going to say the opinions of 3000 residents should hold some weight to that number. In 2016 it was noted in a CBC interview that the fires in Fort McMurray – which if you recall, also only has one exit – brought new urgency to a secondary escape route for Juniper Ridge. Sure, there is a road there, but it had not been groomed, it is still unpaved, and at the time residents needed it, it was inaccessible. Had there had been heavy rain with the thunderstorm that evening, the road would have turned to mud and it may have been rendered impassible (i.e. low riding vehicles).

Additionally, as residents have expressed, there also needs to be a completed exit on the East side of Juniper. East Juniper is more heavily populated than the West and if another evacuation is to occur on that side of the community, the same traffic jam will form. Unless there is more than one direction for residents to go. Keep in mind, there is currently no Emergency alert system for Fires in our area. Many residents were only aware of the fire because they were warned by neighbours, who had been warned by other neighbours etc. (I have Voyent, and not a single notification was sent during the fire).

The opportunity for individuals to be notified, collect go bags, children, and animals, adds additional time onto evacuations. Suggesting a closer exit route would be incredibly beneficial for residents like myself who are past the school to the East. It takes me approximately 8 minutes from my home on Capilano to get to the bottom of Highland drive, without traffic. It took me 5 to get myself and my animals in my car. Again, Lytton residents had no more than 15 minutes in some cases to leave the area. Now let’s add all of the traffic from West of the school that would be ahead of me. The odds are against me getting out safely.

Now to all of City Council and whom it may concern, I hope this puts into perspective the importance of additional exits in Juniper. You have over 3,000 residents telling you, THIS IS A LIFE-OR-DEATH PROBLEM! It’s your turn to show us that you’re listening and not allow people who were not a part of the evacuation nor have knowledge in how quickly natural disasters can turn to make all of the decisions.

You need to listen to the people. Yes, we chose to live in the community knowing there was only one exit route. But 99% of the time we are not facing natural disasters and it is an amazing family oriented, and quiet community. You will never find a home or community that has 100% of the features you wish it had. The problem is that remaining 1% still needs to be accounted for especially when the 1% is regarding the safety and wellbeing of your residents.

Yes, it’s going to cost money to build these exits properly, but in the end, life is more important than many amenities that the city of Kamloops provides or other projects that are not a safety issue. In this end which truly has move value? Money or the Lives of potentially thousands?

It is time to start listening and set priorities based on the safety of your communities.

HALEY ISOTALO
On behalf of the community of Juniper Ridge