The last presidential election may have felt like a lifetime ago. But four years later, familiar voting dynamics are at play, along with new ones. In 2020, stress levels over the COVID-19 pandemic are a significant factor in how Americans intend to vote – or already have cast their ballots.

So too is the enthusiasm – or lack thereof – for the two presidential candidates. Trump voters are motivated by a fervent support for their candidate. Joe Biden supporters – by contrast – are divided between excitement for the Democratic nominee and a more basic desire to keep Trump from a second term. Similar vote dynamics among Democrats were at play four years ago when Trump and then-presidential nominee Hillary Clinton battled for the White House.

Heading into the final days of the 2020 campaign, however, it is Biden who holds an eight-point edge in popular vote over the incumbent (53% versus 45% respectively). While Trump battles in swing states for voters more likely to cast a ballot for him on election day, Biden has an advantage among those who have already voted. That said, the ghosts of elections past may be hanging around a little longer than Halloween this year, as uncertainty over mail in ballots, voter suppression, and a possible court-decided outcome may haunt voters in the U.S. and observers around the world. 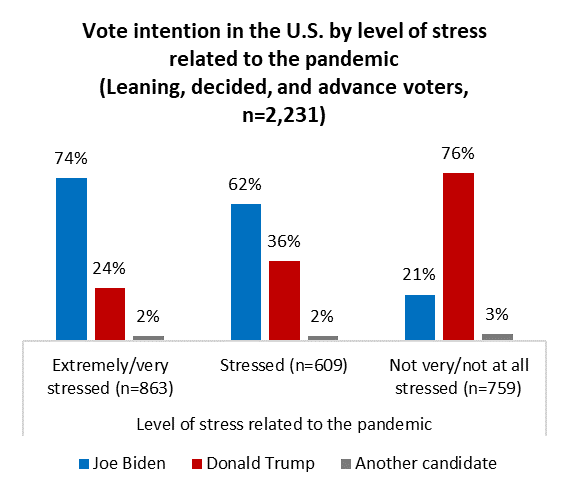 Link to the poll here: www.angusreid.org/us-election-2020