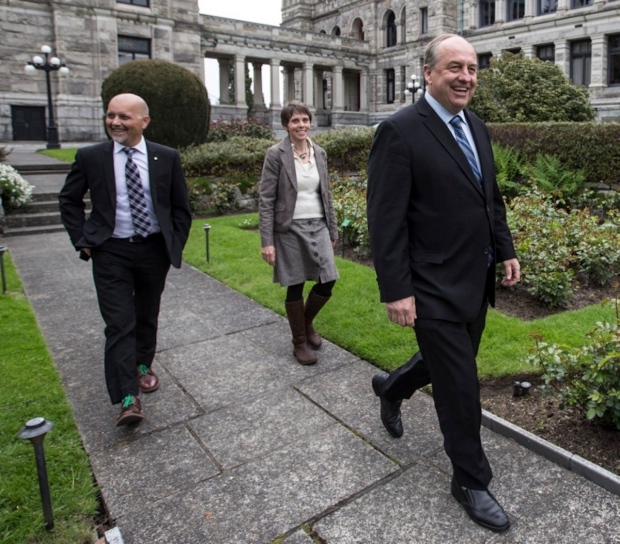 The B.C. Green Party’s Adam Olsen, left, Sonia Furstenau and then-leader Andrew Weaver at the legislature on May 10, 2017, the day after they were elected as MLAs.
(Image: Darren Stone, Times Colonist)

KOOKY. When former B.C. Green leader Andrew Weaver (you knew he had stepped down, right?) took a highly public swipe at his likely successor last weekend, one word stood out.

It came after Sonia Furstenau went on Twitter to talk about exploring a four-day work week for B.C., something Prime Minister Jacinda Ardern has floated in New Zealand.

“This is an absolutely kooky idea,” Weaver tweeted in reply to the Cowichan Valley MLA. “This is not New Zealand. U clearly haven’t thought this through as it’s far more complicated than just a few sound bites and a tweet. Perhaps you should do background research before shooting from the hip. Classic decision-based evidence-making.”

Set aside, for a moment, the debate over whether a standard four-day work week would be good or bad. That’s secondary to Weaver’s astonishing/troubling/entertaining (pick one, according to your political leanings) choice of the word “kooky” to describe an idea advanced by the leader-in-waiting of what was until recently his own team.

Kooky is the B.C. Greens’ kryptonite. For years they have had to fight the notion that they cater to a fringe. New Democrats in particular enjoy likening Greens to the anti-vaxxer uncle who shows up for Christmas dinner muttering about chemtrails and conspiracies.

That’s why it was important to the Greens when UVic professor Weaver, a well-known authority on climate change, brought his serious-scientist credentials to the party. He was elected MLA for Oak Bay-Gordon Head in 2013.

As the only Green in the 87-seat legislature, it was no surprise when he was acclaimed as party leader in 2015. The caucus grew to three with the election of Furstenau and Saanich North MLA Adam Olsen in 2017, the south Island trio propping up the NDP’s minority government. They got to eat at the big table.

Weaver announced in October 2019 that he would make way for a new leader, then in January resigned from the caucus to focus on family health issues. Olsen became interim leader, though he made it clear he didn’t want the job full-time. Furstenau declared her candidacy in a race that, although put on hold by the pandemic, appears hers for the taking when it resumes.

So, it was as an independent MLA freed of the unwritten rules of caucus solidarity that Weaver, not known for tempering his language, barged into what became a lively Twitter thread on the weekend.

His “kooky” comment was followed by one in which he accused Olsen and Furstenau of being afraid to stand up to the NDP over liquefied natural gas development. “I was ready to go to election, but in my opinion they were more interested in re-election than they were about standing up for @BCGreen principles.”

When someone posted a tweet saying “Weaver’s Greens were far more centrist than most realized. They were fiscally responsible environmentalists. Leadership changed b/c the party came to represent the more radical left,” Weaver replied with: “You are 100% correct.”

Weaver clarified that last comment Monday. He had always planned to step down as party leader before the next election, he said.

Otherwise, he was not only unrepentant, but expansive. He worries about the party being viewed as returning to the days of “fringe elements.” He says the Greens are siphoning activists from the NDP, but losing pragmatists in the process. Casually bringing up the idea of a four-day week “scares the hell” out of a business community he spent years wooing.

Furstenau isn’t backing off, either. There’s an enormous desire to see change following the pandemic, she says, and this is the right time to start talking about innovations such as a four-day work week. “What do we want to rebuild coming out of this? Having a workforce that isn’t ground down to the bone is probably a good place to start.”

What about the “kooky” comment, which she’ll now drag into the next election? Politicians should model the kind of behaviour they want to see in others, she replies. They should debate policy and exchange ideas, “but not in a way that degrades people.”

As for Olsen, he said all three Greens repeatedly voted against bills that paved the way for LNG. “There was no fear on my part.”

In any case, Olsen said, the people he talks to now are happy to see elected officials working together to address the current crisis. The political divisions can come later.