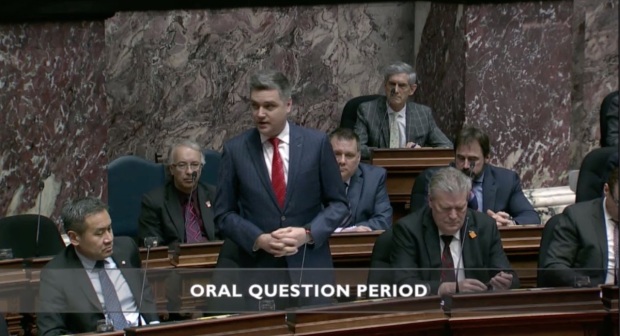 Debate during Question Period in the B.C. Legislature, Tuesday, March 3, 2020.

T. Stone: British Columbians living in condos and townhomes want the NDP to take action today. Strata insurance premiums are skyrocketing by as much as 400 percent. Judy Dryden says: “The huge increases heaped upon condos are making it difficult to meet our monthly bills. These huge increases are attacking very vulnerable people.”

My question is this to the minister: what possible reason could the minister have for not acting quickly to help Judy and the thousands of other British Columbians just like her?

Hon. C. James: As the member knows, this issue is urgent and challenging and complex. This is a private industry. These are private businesses that set their terms for condo insurance. We are looking at options to be able to tackle the challenge, both short term and long term.

As I’ve mentioned, there are issues that we believe we can look at in the short term, but there are long-term issues that also need to be addressed, which is why we’ve referred it to the B.C. Financial Services Authority to take a look at regulation. We’re examining the bill that has come forward from the member for Kamloops–South Thompson. It doesn’t appear that there are things that will address the challenges immediately, but there are some interesting pieces that we’re reviewing.

One of them, for example, is the issue of water damage and a prevention program, which the member mentioned. This is very similar to the leaky-condo program that was in place by the past, past, past government and actually cancelled by the other side. But it’s an interesting idea to bring forward. I think there are some options there that we’re certainly reviewing.

It actually turns out that the Finance Minister has 75 million reasons for her delays and excuses. Budget 2020 shows that the NDP will collect an additional $75 million in tax revenue on insurance premiums over the next three years. The NDP are actually profiting on this strata insurance crisis.

Laura Obsil says this: “Enough is enough in money grabs, be it our taxes or our strata costs.”

My question is this. Why is the minister gouging British Columbians like Laura? Why is she not taking swift, decisive action to address these skyrocketing strata insurance costs?

The national commercial insurance task force is also looking at this issue, because it is an issue that’s causing problems across the country. We are working on both short-term and long-term solutions. The member will hear that when they come forward.