February 19, 2020 – On Feb. 7 Trans Mountain president and CEO Ian Anderson announced that the company’s beleaguered pipeline expansion project between Burnaby and Edmonton would now carry an estimated cost of $12.6 billion, a considerable jump from the $7.4 billion initially estimated by the federal government, or the $5.4 billion estimated by previous owner Kinder Morgan.

A new study from the non-profit Angus Reid Institute finds that when Canadians learn of the new associated costs, their support for the project drops.

When first asked, 55 per cent support the TMX expansion, a number identical to support found last month. However, after then being informed of the increase in operational costs associated with it, and the increased taxpayer burden, support drops to 48 per cent, and opposition rises a corresponding seven points. Canadians are now close to equally divided (48 per cent support vs 45 per cent oppose).

This represents a two-year low point in support for the project, which stood at 49 per cent in February 2018. Opposition has increased 12 points over that same period.

Key regional elements emerge from this new data. The first is that British Columbians are now more opposed to the project than they are in support of it for the first time in five years. Further, six-in-ten Quebec residents (61 per cent) and half of Ontario residents (47 per cent) now oppose the project, both at their highest levels since the beginning of 2018. 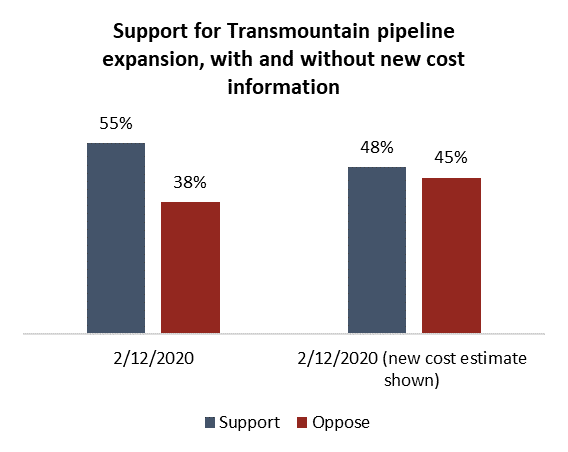