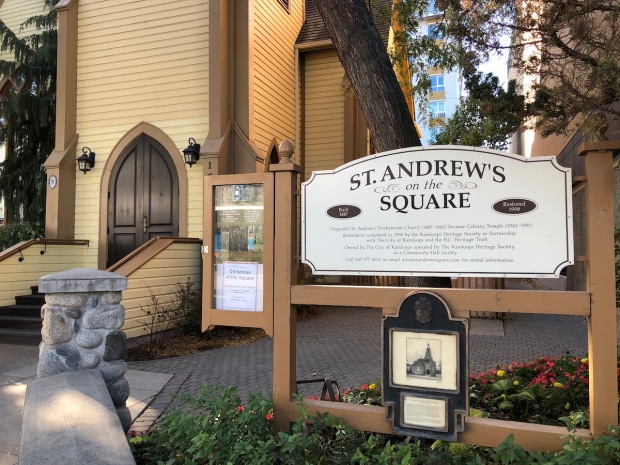 I HAD A LONG CONVERSATION yesterday (Oct. 9, 2019) with Byron McCorkell, the City’s Community and Protective Services director, about St. Andrew’s on the Square.

I worked with Byron at City Hall for almost six years and I have nothing but respect for him, but we disagree on this one.

My view is that the City — from administration to the committee stage to council — has handled the St. Andrew’s on the Square situation very poorly. Byron doesn’t think so.

He’s adamant the City has tried to work with the Kamloops Heritage Society on easing into a City takeover of management and operation of the building, and that the society should have seen it coming.

He echoed a news release issued Tuesday by Barb Berger, his recreation, social development and cultural manager. Her statement was the City’s first public counter in the dispute with the heritage society, and it was followed Wednesday by a couple of radio interviews by Deputy (Acting) Mayor Mike O’Reilly, who parroted Berger.

The City’s defence of its treatment of the heritage society, as outlined by Berger and repeated by O’Reilly, is that the society asked five years ago that the City consider taking over the operation of St. Andrew’s.

This five-year plan has come out of nowhere. No record of it has been released. O’Reilly acknowledges he hasn’t seen it. The society has searched its minutes and says nowhere is there a resolution asking the City to work towards a takeover.

McCorkell says a written transition plan wasn’t necessary. Various society board chairs have made it clear over the years, he says.

Yet, the society says this was not raised and discussed with the current society board in the run-up to the meeting last May when the society made its presentation to Denis Walsh’s finance committee in support of renewing its lease on St. Andrew’s.

Nor did Mayor Ken Christian say anything about it in his August letter informing the society it was going to be removed as the operator. The letter opens by saying “Over the years, the City and Kamloops Heritage Society (the Society) have discussed the burden of operating, maintaining and repairing St. Andrew’s Church.”

No mention of the society wishing to vacate, and the letter is clear on who’s making the decision. This, this and this will happen.

Nor, I’m led to believe, did it come up at a meeting between finance committee members and the society Sept. 19 — a meeting O’Reilly didn’t attend because, he says, it “came up at the last minute.” Otherwise, he says, he’s attended all in camera committee and council meetings on the issue.

When I was working on last Saturday’s column, the one that set things off, I interviewed heritage society chair Peggy Broad, former board member Lee Morris, Walsh, Berger and St. Andrew’s manager Mel Formanski.

In none of those interviews was the existence of a five-year takeover plan mentioned. In fact, Broad is definite that the society hasn’t been asking for it. Berger did mention that the lease is subject to a five-year review and renewal.

It seems to me if there was agreement that the society should willingly hand over control of St. Andrew’s to the City, there should have been a written document outlining the process and conditions.

There should have been clear agreement, for example, on a timeline, on disposal of assets, and on a strategy for a smooth transition. In writing. Not a done deal in a letter from the mayor.

And the City, in its own interests, should have calculated the costs of the change to taxpayers. McCorkell contends the City can do it with existing City staff at no cost, but no budget has been laid out and no plan for which City staff will be deployed other than switching bookings from Formanski on-site over to the City’s booking system.

It’s entirely possible, maybe even likely, this whole thing is inadvertent, that it’s due to a colossal misunderstanding brought about by a failure to communicate. It’s entirely possible that at times over the past five years one or another society board member has broached the idea of looking at a City takeover.

So, a  few questions would have been natural before the axe fell. Such as, do you still want the City to take over? If not, how can we work together to ensure the overdue maintenance items are taken care of?

But what’s done is done. It’s less important who was right than it is to ensure the building is well maintained and that a long-standing community group remains involved.

Though McCorkell says he doesn’t know what’s on the agenda for Friday’s meeting between Berger, Broad and Formanski, it could be pivotal.

It needs to be an open, candid and respectful discussion. McCorkell, for example, says the society hasn’t been forthcoming with details of bookings and revenue. If that’s what’s really bothering the City, the City should demand that information and the society should provide it.

But the City should also be open to revising the lease to take over full responsibility for maintenance and repairs while leaving the society to manage and operate the site. That is one thing that ain’t broke.

Sure, the decision is always council’s, but the initiative came from staff. Since the decision was made behind closed doors, we don’t know what information council considered. Right now it’s back in the hands of staff, and it’s staff’s turn to show some diplomacy ahead of a likely discussion by council about revisiting the matter.

I’m not sure whether the book is totally closed. “It’s going to take some more conversation,” McCorkell says.

This situation can be fixed but it will take administration, council and the society to come together, something that hasn’t happened so far.

NOTE: This column has been updated to clarify which meeting Coun. Mike O’Reilly didn’t attend.

2 Comments on ROTHENBURGER – An update on the St. Andrew’s on the Square disagreement