August 7, 2019 – As the 2019 federal election campaign approaches and parties begin making their pitches to voters, a new public opinion poll from the non-profit Angus Reid Institute suggests there is ample room for policy platforms based on improving health care delivery for Canada’s aging population.

The study finds more than 2 million Canadians aged 55 and older face significant barriers when accessing the health care system in their province, such as being unable to find a family doctor or experiencing lengthy wait-times for surgery, diagnostic tests, or specialist visits.

Moreover, most Canadians in this age group have at least some difficulty getting the care they want or need in a timely manner.

The study focuses on the health care experiences of older Canadians, as well as their assessments of the quality of care they receive.

Most Canadians this age take a positive view of their own health care, but they are more skeptical in their assessments of the trajectory of care in their provinces. The perception that health care in their home province has “deteriorated” over the last 10 to 15 years outpaces the view that it has improved in every region of the country except Saskatchewan.

Indeed, while barriers to health care exist for Canadians 55 and older in every province, the problem is most acute in Atlantic Canada, where provincial systems are often swamped by growing demand from their aging populations. 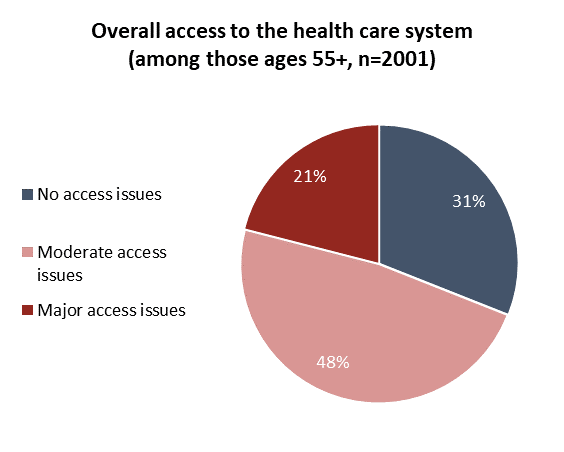