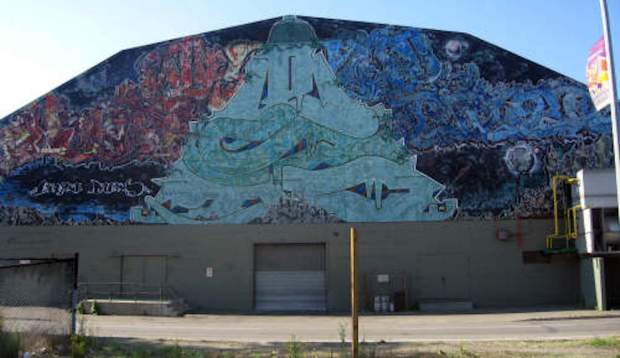 Column published in the Kamloops Daily News on Nov. 2, 2010.

WHAT WAS ONCE BILLED as the largest graffiti mural in Canada reached its 10th anniversary earlier this year. A good time for it to say goodbye.

While I’d be fine with a nice overcoat of beige latex semi-gloss, others disagree. I have some interesting debates from time to time with other members of the Graffiti Task Force — of which I’m still a member — on the future of that mural.

It came into existence not long after the creation of the task force itself, launched to fight what was then a growing graffiti problem.

Then-councillor Dave Gracey, along with parks and recreation director Byron McCorkell, came up with the idea of hiring some graffiti artists to decorate the north wall of the Memorial Arena, a declared heritage building.

The concept was that if graffiti artists were allowed to express themselves in a legitimate way, it would discourage tagging.

Even when the project began in the spring of 2000, it was controversial because some people saw a public building named in honour of our veterans as an inappropriate canvass.

Over time, though, it became accepted as a part of the landscape, much like a particularly ugly black velvet rendition of bulldogs playing poker might become white noise in your living room.

Dave Warriner, president of the Kamloops branch of the Royal Canadian Legion, wouldn’t be disappointed to see it go.

He understands the concept of public murals and tagging but says veterans aren’t fond of the mural. “A number of veterans who are Legion members and a number who aren’t have concerns that Memorial Arena was built to honour the veterans,” he said. “They would love to see it (the mural) changed.

“Are the veterans happy with what’s on the wall of Memorial Arena right now? No, they aren’t.”

A new mural, one that honours veterans, would be quite another matter. But, he pointed out, murals are expensive and the Legion doesn’t have the funds to pull it off.

Warriner and his fellow veterans don’t know it yet, but they have an ally in the man who facilitated the graffiti mural. Respected artist Vaughn Warren, who has created several pieces of public art for the city (and who, incidentally, also designed the Tournament Capital logo), says the mural isn’t sacred.

It made a huge point about graffiti being a true art form, and the five artists who created it are now “legitimate,” practicing other forms of art.

“I’m not going to sit here and feed you material that denigrates the project,” he warned me. But, he added, “I think that the project has served its purpose. Murals come and go.

“If that wall was used for a different artistic pursuit I wouldn’t have a problem with it.”

Warren has always hated the use of tagging to vandalize property — the objective of the Memorial Arena experiment was part of a plan to divert vandals to legitimate expression “and not go skulking about back alleys.”

The “engagement” aspect of the fight against graffiti vandalism was dropped somewhere along the way, said Warren, who served as vice chair of the Graffiti Task Force in its early days.

“I think the Graffiti Task Force is a failure. It’s just a big paint-out.”

What about a new mural honouring vets? “Awesome. Hell yeah,” he said, his mind already working on how to best use the wall for such a project. “It’s a beautiful huge canvass; it needs contrast….”

So, all that’s needed is money, and maybe a little nudging from City council and Parks and Rec. Anybody out there know how to fill out a grant-application form?