An exchange between MP Cathy McLeod, and other Conservatives, and Minister of Innovation Navdeep Bains on Thursday, Feb. 23 during Question Period, on the sale of Retirement Concepts to Anbang Insurance Group of Beijing via Cedar Tree Investment Canada, a subsidiary. Retirement Concepts owns 25 locations including Kamloops Seniors Village. Anbang stated Thursday its purchase was “rigorously reviewed and fully approved by health authorities in British Columbia, Alberta and Quebec with primary jurisdiction over seniors care facilities in those provinces.” B.C. Health Minister Terry Lake, however, was quoted as saying regional health authorities in B.C. haven’t completed their reviews or decided whether to issue operating licences to the new owners. He said earlier that Cedar Tree has offered assurances there will be no changes in day-to-day operations of Kamloops Seniors Village. 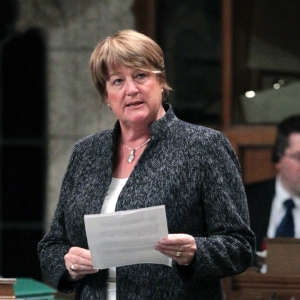 Cathy McLeod (Kamloops-Thompson-Cariboo): Mr. Speaker, I had a number of phone calls last night from seniors who were concerned about the Chinese takeover of facilities in B.C., including in my riding of Kamloops—Thompson—Cariboo. These seniors are concerned about the mysterious Chinese-owned organization with whom Morgan Stanley in the U.S. has refused to do business but the Liberals have welcomed with open arms. They want the Prime Minister to tell them who the owner is of this secretive company and who he agreed to sell their homes to.

Navdeep Bains (Liberal), Minister of Innovation: Mr. Speaker, we believe in investments. We think it is absolutely critical that we have investments in Canada to grow the economy and create jobs. With respect to this particular case, under the Investment Canada Act, Cedar Tree will now be owned and operated by Canadians going forward. More importantly, it will have additional financial resources to expand its facility, which means it will be able to create more jobs. That is good for British Columbia, good for seniors, and good for all Canadians.

Cathy McLeod: Mr. Speaker, I know many of the people who live in these facilities, and they deserve to know who owns their home. Our seniors are concerned about the quality of care, of food, and the credentials of the people caring for them. This transaction is clearly not about charity; it is about profit. Why would the Prime Minister put the care of our parents and grandparents at the mercy of profiteers pulling strings from Beijing?

Navdeep Bains: Mr. Speaker, it is our government that has shown leadership when it comes to supporting our seniors. We have reduced the old-age security age limit from 67 to 65. We have increased the guaranteed income supplement by 10%. With respect to this particular transaction, the additional financial resources will allow Cedar Tree the ability to expand, provide better service, and create more jobs. This is good for seniors, good for the economy, and good for all Canadians.

Diane Finley (Conservative, Haldimand-Norfolk): Mr. Speaker, yesterday the Prime Minister defended his approval of the sale of Canadian seniors’ care facilities to the Chinese, claiming that it would create jobs for Canadians. Today we learned that nothing could be further from the truth; there are absolutely no new jobs attached to this deal. Clearly, pleasing Chinese billionaires is more important than Canadian jobs and Canadian seniors. How can he justify selling Canadian medical facilities companies to his friends in Beijing with no guarantee of benefits to Canadians?

Navdeep Bains: Mr. Speaker, we engaged the British Columbia government and the minister of health to make sure that all of the regulations would be followed in that province.

However, more importantly, we believe that global investment is good for Canada, because when we bring investment to Canada, it creates opportunities for growth. When we grow the economy, we create good-quality jobs. What does “good-quality jobs” mean? They help strengthen the middle class. That is what this investment is all about, making sure that we maintain good jobs, and making sure that it has additional financial resources to expand its facilities and create more jobs. This is good for the economy, good for job creation, and good for the middle class.

Peter Kent (Conservative, Thornhill, On.): Mr. Speaker, beyond the very real concerns for the welfare of Canadian seniors living in these care facilities, the Liberals’ indecent rush to embrace this sketchy deal has skated too quickly past security and investment due diligence. American government regulators and investment houses have absolutely refused to deal with this Chinese company on the basis of its murky ownership and shareholder structure. If the minister is so confident in this backroom deal, will he make public the analysis of the Canadian security agencies that reviewed the deal?

Navdeep Bains: Mr. Speaker, the member opposite knows that this deal was under the provision of the Investment Canada Act. We did our due diligence, followed the process, and made sure that this was in the overall net economic benefit of all Canadians. Otherwise we would not have proceeded. As I have reiterated before, it is about global investment, creating jobs, and growing the economy. We made the best decision in our national interest and in the net economic benefit for British Columbians and all Canadians.