Mark Rogers writes a column about social media and hosts a blog at http://www.newsonaut.com.

COLUMN — A newspaper mistake briefly made the rounds on Twitter last week — the results of a survey showed both answers as Yes.

It was kind of funny because the person who tweeted a picture of the error asked whether this was an indication of the decline of newspapers. The answer had to be Yes because, apparently, that was only answer available. And that’s the way Twitter is — have a chuckle then move on to the next thing.

A more serious answer, of course, would be No. Someone made a mistake, just as people have been making mistakes since the time humans evolved to develop cognitive abilities.

Cavemen no doubt had inaccurate depictions in their cave paintings. Egyptian hieroglyphics could be riddled with misplaced birds for all we know. When Gutenberg invented the printing press, he also invented a way for blunders to be multiplied and kept as souvenirs.

The trouble with newspaper mistakes is that they have a permanence that makes them all the more cringeworthy. Historians hundreds of years from now will search through futuristic archives, find them and have a laugh at the paper’s expense long after it has ceased to exist.

I have to admit: they are funny. I just hope that one of mine never shows up.

But seriously, an argument could be made that there are more mistakes than ever in the news wherever the printed word is found. Misspelled words are not at all uncommon in newspapers, on the Internet or on television. 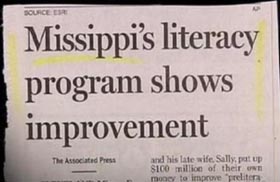 A classic headline error that will live through the ages, thanks to Google.

Unrelenting cutbacks mean there are fewer journalists in newsrooms and fewer eyeballs to catch mistakes before they are published. I can remember a couple of times when errors got by editors and were caught by a pressman. Yes, there was a time when newspapers had presses in the same building.

Nowadays, many reporters are expected to write a story and publish it straight to the Internet. And it shows — awkward sentence structure, misplaced words, and obvious typos are all there. In the past, an editor would have corrected them.

The problem with editing your own copy is that the brain often sees what you meant to write instead of what you actually did write. Even having editors isn’t a guarantee that flubs will be fixed. These people need to be trained and experienced — it’s easier to make a good catch when you’ve seen pretty much every kind of mistake that’s ever been made.

News organizations are well aware that errors — even something as minor as misspelling “forty” as “fourty” — hurt their credibility. After all, if they couldn’t get that right, then maybe they’re getting more important things wrong as well. The facts themselves can be called into question.

Journalists hate mistakes every bit as much as readers, but they need support. And that’s been slowly dwindling away.

Mark Rogers is a Kamloops journalist who publishes a blog at http://www.newsonaut.com. He can be reached at mark@newsonaut.com.