ARMCHAIR MAYOR’S POLL — A California bill that would have banned the keeping of orca whales in captivity was delayed this week but it sparked a new debate. Is it time to end the capture of orcas, or is it a worthwhile educational exercise? Vote in today’s poll on the righthand side of this page. BACKGROUND — California assembly member Richard Bloom introduced the Orca Welfare and Safety Act in March that would have banned the use of orcas as performers in theme shows, ended captive breeding programs and ended the import and export of orcas and their genetic material into and out of the it state. (Care2.com) 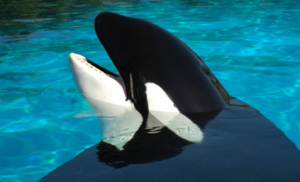 It would also have retired SeaWorld’s 10 captive orcas into sea pens or kept them for display only.

The assembly was presented with 1.2 million signatures in support of the bill.

Opponents of keeping orcas in captivity say they are too big, to intelligent and too social to thrive in tanks. However, the California bill was delayed 18 months for more study.

On Wednesday, Vancouver Mayor Gregor Robertson wrote a letter to the Georgia Straight expressing his personal belief that “the Vancouver Aquarium should begin to phase out the holding of whales and dolphins in captivity.”

The Vancouver Aquarium no longer keeps orcas but does have two beluga whales and two porpoises.

Proponents of keeping orcas and dolphins in captivity say there are benefits from educational and conservation perspectives. The more that is understood about their behavior, they say, the better chance there is of protecting the species.

SeaWorld says, “There is no organization more passionately committed to the physical, mental and social care and well-being of animals than SeaWorld.”

An editorial in the Fresno Bee said the bill should be defeated and the San Diego SeaWorld orca shows continued.