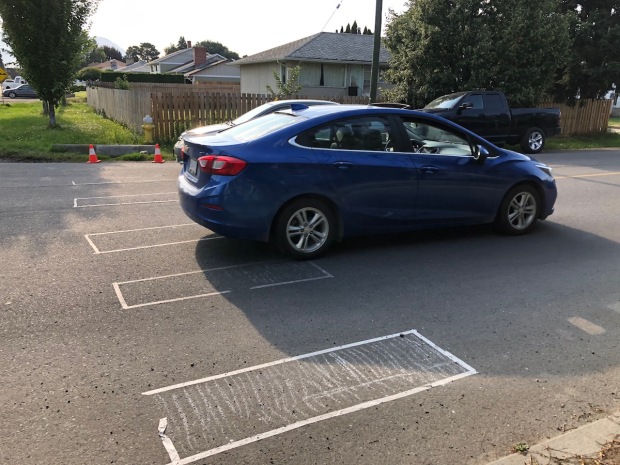 HATS OFF TODAY to those among us who follow the rules, but not always. Who see a need and don’t wait for the wheels of bureaucracy to get around to doing something about it. Who change public behaviour with a broad hint and some white tape and chalk.

Yes, those who don’t see the need to take to the streets with placards but, instead, just make change all on their own.

I’m talking about the Crosswalk Crusader, the anonymous individual who proved his point about the need for more attention to the needs of pedestrians in the area of the Ridgeview long-term care facility in Brocklehurst.

People on that block have noticed a big increase in traffic since a detour was set up around construction on Tranquille Road. There’s no city crosswalk on Desmond Street in front of Ridgeview where folks sometimes like to cross over to enjoy a smoke or whatever under a tree and a patch of grass.

One morning last week, they woke up to find a crosswalk — of sorts — had been installed overnight. It was made with squares about the size of regular crosswalk markings but instead of the usual white paint it was done using what appeared to be white medical tape and some chalk to fill in the middle.

Up close, it was clearly an amateur job, but to drivers approaching from down the street it looked more official. So, they began stopping for pedestrians at the new, unofficial crosswalk, either because they were fooled or because they took the hint.

City bureaucracy, though, could brook no unsanctioned pedestrian protectors, and soon removed it. It’s understandable, of course — there are no doubt all kinds of rules about safety and liability and such.

Still, one can’t help but admire the thinking and the boldness behind it. So here’s to the Crosswalk Crusader, the Midnight Marker, the Pedestrian Prankster, the Cheeky Chalker. You made our week.