Feb. 15, 2019 – With the number of opioid related deaths in this country expected to surpass 4,000 in 2018, Canadians continue to search for answers – and consider more extreme measures – to address what half call a serious problem (46%) and one-quarter (24%) view as a crisis.

The latest public opinion survey from the Angus Reid Institute finds more than eight-in-ten Canadians (85%) say they would support mandatory treatment for anyone dealing with an opioid addiction. Further, half (48%) are willing to explore the decriminalization of all drugs in Canada. Public health officials in Vancouver and Toronto have recently proposed such a change in order to reduce fentanyl related overdose deaths.

But three years into a state of emergency in British Columbia, and despite $230 million in new funding to fight the opioid epidemic from the federal government, many say neither Ottawa (45%), nor their own provinces (43%) have done enough, and continue to call for more resources allocated to the epidemic.

Meantime, the prevalence of this issue continues to grow, hitting closer to home for many Canadians. The percentage who now say this is a serious problem or crisis within their own communities has risen eight points in the 14 months since the Angus Reid Institute last asked – from one-third (33%) to 41 per cent. 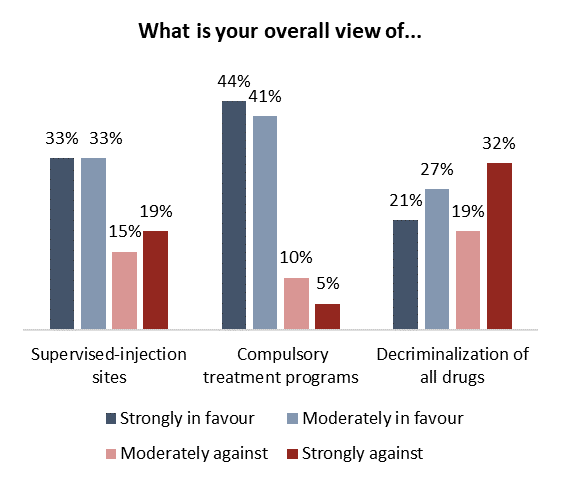 Link to the poll here: angusreid.org/opioid-crisis-2019/