The B.C. Wildfire Management Branch announced the ban today after thunder and lightning storms raked the region Tuesday night. That came after days of scorching temperatures, raising the fire danger rating to “high” throughout the Kamloops Fire Centre, with some areas rated “extreme.”

There have been 128 wildfires in the Kamloops Fire Centre region this season. 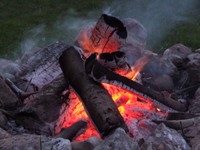 “With the current trend of warm and dry weather, wildfires in the region have displayed aggressive behaviour and have required additional firefighting resources,” the branch said.

The biggest wildfire in the Kamloops region remains the Cisco Road fire near Lytton, which has burned 2,174 hectares and is 70 per cent contained. The recent hot weather caused some flareups.

In addition to campfires, the prohibition applies to open fires of any size, industrial burning, fireworks, tiki torches, sky lanterns and burning barrels. It doesn’t apply to cooking stoves that use gas, propane or briquettes, or to a portable campfire apparatus with a CSA or ULC rating that uses briquettes, liquid fuel or gaseous fuel, so long as the height of the flame is less than 15 centimetres.

Provincial parks, Crown lands and private lands are included but it doesn’t apply within the boundaries of a local government that has forest fire prevention bylaws and is serviced by a fire department.