COLUMN — I hate to confess this, but we have a little problem with sweeteners in our house.

Whether it be brown sugar, honey, or maple syrup, sweeteners just don’t seem to last very long around here thanks to one person — and it’s not the one who’s pregnant. When it comes to these sweets, Dan doesn’t have any will power. He will consume them in great quantities during his “toast parties” until they’re completely gone. 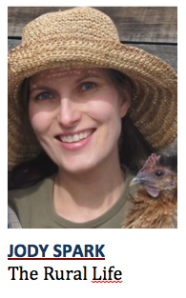 Late at night, when nothing is stirring but Dan’s stomach, he will smother butter over at least six pieces of toast and add whatever sweetener is available.

The fact he expends a lot of physical energy may contribute to his high caloric need, so the problem isn’t an expanding waist line. One problem is that I never have the ingredients I need for baking or the children’s oatmeal.

But the bigger problem is that he feels guilty for binging, and blames ME because of it.

Let me relay the typical conversation:

I come home with groceries, bought according to the meals and baking planned for that week. Dan helps me put them away.

“WHAT is THIS?!?” he says, holding up honey and glaring at me.

So, I began to hide the sweeteners. First, I would just put them in cupboards where they didn’t belong like above the fridge, above the stove, or behind the tea towels.

But that wasn’t good enough. I’d wake up at night after Dan would come home and the house would reek of toast and I would know he had a toast party. The next morning I always expected a good ragging:

“I found your hiding spot,” he says, eyes shooting daggers.

“Jody, you’re going to HAVE to do better than that. Don’t you KNOW WHAT WILL HAPPEN!”

So, I found better hiding spots in the kitchen. The best one was in the wheat grinder. It took him a week to find that one. I then decided I must move them out of the kitchen, but it only took him a few days to find the syrup between the towels in the linen closet.

It was starting to get really stressful, but you know it’s a really big problem when your four-year-old gets paranoid about it. I would bring out the honey in the morning to put a little dollop in the kid’s oatmeal and Wee Sparkling’s eyes would be as wide as saucers.

Now the sweeteners are in a very obscure place, hidden for almost two weeks. I’d love to tell you where, but Dan reads what I write. And around here, honey is classified.