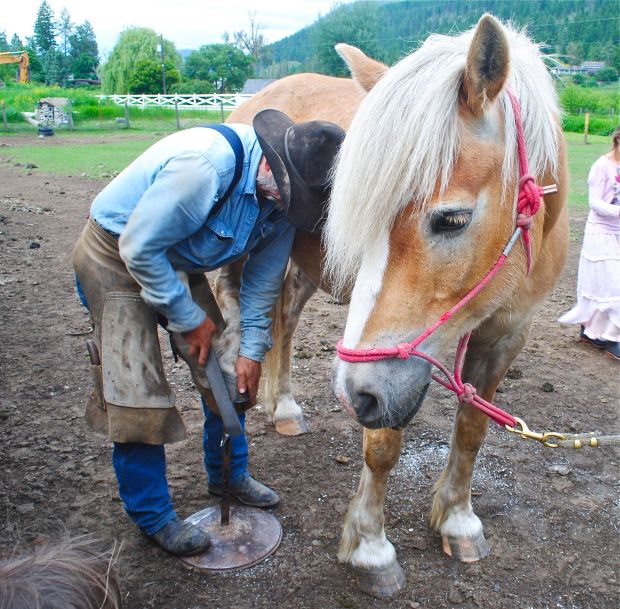 Albright gets a trim and a bit of filing.

Dan and Jody Spark alternate writing about life on their small acreage in McLure. This week it’s Jody’s turn.

COLUMN — Some people just have a way with animals.

My neighbour is one of those people. Whether it be due to practice or some inborn talent, she knows how to treat animals, and it’s not always lovey-dovey. And the animals know that, and don’t seem to mind. In fact, they seem to like it.

I would call her a goat or chicken whisperer, but her methods aren’t always whispery-gentle. She’ll rotate a hen feet over comb and inspect its bottom like a monkey picking nits.

She’s often on parasite patrol and says that’s the best place to find them — at the base of the feather shaft, near the hen’s vent. Yank! Yank! She pulls out some questionable feathers fast and quick. The hen doesn’t even flinch.

She could use pesticide dusting powder, she says, but it’s quicker and toxin-free to just pull the feathers. She drops the hen and it struts away, unaffected.

Same thing with goats. Oral dewormers can be an ordeal to administer, and forcing a goat to do anything it doesn’t want to do is no picnic. But before you know it, she’s come from behind, straddles the doe, squeezes the cheeks with one hand and with the other, squirts the dewormer with a syringe into the back of its mouth.

A bleat and a fleeting look of confusion, and the goat’s off.

Since becoming rural, I’ve met a lot of animal whisperers and I’ve wondered what I can whisper.

The obvious choice, of course, would be the horse. Unfortunately, I think the farrier has got that one, and he doesn’t even live here. Our horse loves the farrier. Every time the farrier rolls in with his big truck and slides out in his worn chaps and weathered hat, Albright acts like he and John Wayne are about to lounge around the campfire and share beans and stories.

Our hefty halflinger stands like a perfect gentleman, until the farrier is within pick-pocketing distance. Then the tools in his chap pockets are fair game, especially if he doesn’t think his buddy is paying enough attention to him. With surgeon-precision, Albright uses his lips to slide out heavy duty files and clippers to drop them before the old cowboy’s boots, and waits for a reaction.

The farrier gives him a fist pump bop on the nose, which gives Albright a start and prompts a look pleading innocence. But then he seeks forgiveness, nuzzling the cowboy’s chest, this time trying to slide the tin of chewing tobacco from behind the embossed circle on his shirt pocket.

How can I garner such affection and admiration?

One time I stood at the fence, chatting with the farrier after he was done a hoof-trimming session, and Albright stood jealously for apparently too long. He nipped me on the arm.

I, too, should command such respect, I thought. I responded with a little fist pump to the nose.

“How COULD you?” Albright shot back an amazed look, and turned away to sulk in his pen. He returned moments later to nuzzle the cowboy.

I used to think I had a special relationship with our milk cow. After all, for a period of time, I was the one who did most of the milking. I would wake up early, and walk into the barn with grain and a song (I heard once cows liked music while milking) and have a pleasant mono-et-mono with Nyla as the morning sun streamed in the dusty barn.

She would come when I called her, let me pet her smooth nose, and would wrap her sandpaper tongue around my hand and give me giant lick-hugs. It was a little wet, but I loved the sentiment, and how could anyone not adore those big soft eyes and pretty eyelashes?

She loves me, I concluded. I can whisper cows.

Then I saw Sparkle toddler climbing all over her as she laid in the pasture. Nyla is just being patient, I thought. Then I saw her lick her. Then I saw her lick one of the other children. Then the goat. Then some other cow’s calf at the neighbour’s. She couldn’t get close enough to lick the horse, but sure tried.

It’s not just me, I resigned. Jerseys love everybody.

There wasn’t much left. I don’t want to whisper chickens. The dog and I were longtime friends, but you can’t teach an old dog new whispers. The only one left was the cat.

This one was risky. The cat came with the house and is notoriously grouchy. This is HIS place, the Spark family are merely staff and subjects.

Cat slinks up to me, commanding me to acknowledge his magnificence. I pick him up and am rewarded with brief purr, then BITE! I spill him to the ground and he looks back to remind me he was merciful, and stalks away.

Dan, on the other hand, picks Cat up, “like lifting a china teacup,” says Eldest Sparkling.

Here’s Dan, admitted big dog person who silently scoffs froo-froo pets. He treats this deadly hunter and Master of Shalom Acres like he’s a species of exceptional significance and beauty.

He shares his coffee cream, scratches in all the right places, and intuitively senses when Cat has had enough, and lowers his paws to the ground with gentleness and ease.

Double sigh. I guess that leaves the children. I am expecting another Sparkling soon, so I guess there will be something new to whisper. But I’ve already whispered four kids.

No chance I can give birth to a puppy, is there?