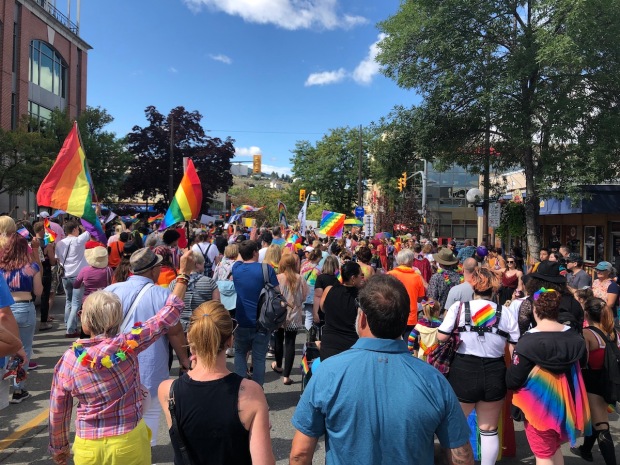 KAMLOOPS IS CELEBRATING Pride Week this week. Think about that statement for a moment.

The city, not just those within the 2SLGBTQPIA+ community, are embracing the annual event — well, it was supposed to be an annual event but, like everything else, got side tracked by COVID.

For the first time since 2019, a parade through the downtown core will conclude a week of activities. That happens on Sunday but merchants have already decorated their windows in anticipation.

Politicians, volunteer groups, sponsors, corporations, social agencies — all will be represented in the parade.

The community has come a long way since the first Pride Parades were held at Thompson Rivers University, when even getting a Pride Week proclamation from City council or flying the rainbow flag was controversial.

Rainbow crosswalks were once contentious, too, but now there are several.

The parade has been a modest thing, just a lot of people in bright costumes waving banners and placards and having a great time, and being cheered by those watching from the sidewalks. This year, decorated cars and floats will be added.

But there will be no RCMP in the parade, at least not in uniform. Once again, they’ve been asked to avoid a visible presence.

The Mounties were first banned from the Kamloops Pride parade four years ago due in part to a history of negative interactions in cities throughout North America. That ban continues to be widespread.

It’s unfortunate because it would be hugely symbolic for police to demonstrate their support and to re-establish trust. But it’s not their decision and they bow to the wishes of the organizers.

However, there’s been a small but significant development this year, with RCMP hosting an open house with the pride society to foster a more positive relationship. It may be the first step toward bringing police back into the parade, and making it a truly inclusive event.