December 2, 2021 – It’s supposed to be the most wonderful time of the year, but emotional and financial stress combined with supply chain woes have Canadians carefully calibrating how much they’ll spend on Christmas shopping, and when they’ll spend it.

Supply chain issues due to the COVID-19 pandemic – with labour in short supply and production challenges ongoing internationally – have been highlighted in recent months.

In turn, the latest data from the non-profit Angus Reid Institute finds a significant segment of would-be holiday shoppers already putting retailers on the naughty list as they struggle to find what they’re looking for in stock. Forty per cent of online shoppers report at least some difficulty adding to cart this season, while nearly half (49%) of in-person shoppers encountered shelves lacking the items they wanted.

Many Canadians consumers are responding by starting their holiday shopping early this season. Indeed, 35 per cent say they are already underway, while a handful (6%) are waiting longer this year, hoping that some of the aforementioned issues will clear up in time to get their list completed while avoiding the logjam.

Inflationary pressure on Canadians has also added challenges for some, as costs for common household goods continue to rise. Asked to assess their financial and emotional stress this year compared to others, more than half (53%) say they are feeling worse emotionally and 41 per cent say the same of their economic anxiety. 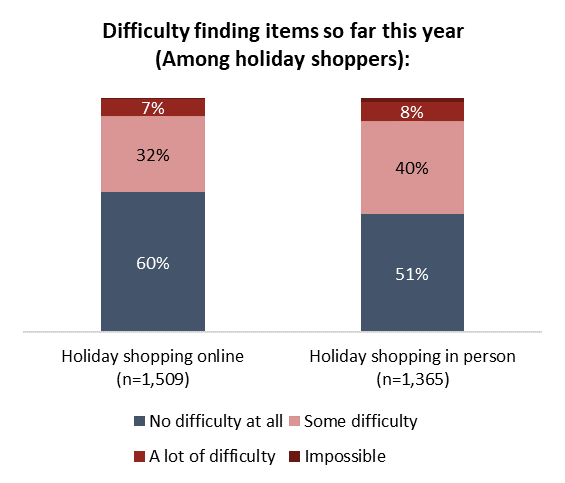