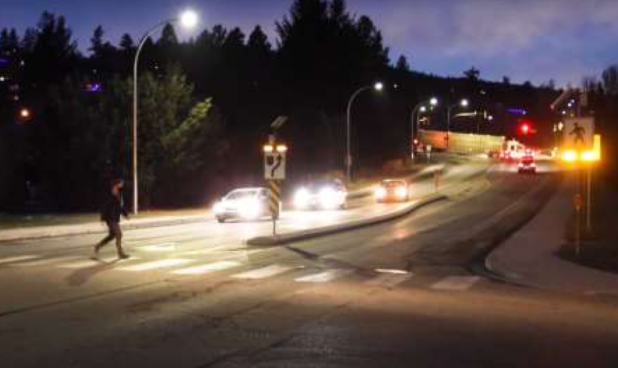 Crosswalk upgrade at Summit and Robson. (Image: City of Kamloops)

THERE’S AN OLD STRATEGY for getting the right answer from your boss. Whenever he or she wants you to craft a plan for how to do something or when you just have a good idea, you come up with three options for consideration.

One, the idea you like, will sound irresistible. Then you add two more options that are less attractive and possibly more expensive but, they’re options nonetheless.

I confess I employed the tactic on an occasion or two when I was a working man. Obviously, City Hall bureaucracy is conversant with the strategy.

At tomorrow’s committee of the whole meeting, City councillors will get a new look at the annual supplementary budget-items list. There are 15 proposals on it.

Council must decide not only on priorities, but on options within those priorities.

One option is the status quo, which sounds unappealing. A second is to ditch the bike patrols. Horrors. And the third is to buy e-bikes, which would boost visibility, be more sustainable and get rid of the need to truck the bikes to where the patrols are being done.

Another item involves crosswalk upgrades. Which would you rather do: nothing, which would mean some crosswalks would be out of compliance with current regulations; use depleted Community Works Funds; or add to the transportation safety fund and get the job done?

Here’s one more example. Shall we a) do nothing about the over-crowded, worse-for-wear RCMP detachment building, b) spend $48 million or so on a new building, or c) spend $8 to $10 million to upgrade the existing one?

Still, it won’t be easy, since council has vowed to keep the overall budget increase as close to zero per cent as possible. We’ll soon find out how good council is at governing by multiple choice.