January 29, 2021 – Is now the winter of our vaccine distribution discontent? As questions and criticism over the federal government’s decisions and handling of its COVID-19 vaccine rollout intensify, new data from the non-profit Angus Reid Institute find faltering confidence and souring moods.

Indeed, while just six weeks ago a firm majority of Canadians (58%) said they were confident in the federal government’s ability to circulate the vaccine throughout the country, just 45 per cent hold this view now.

Amid shipment delays and increasing concerns about future supplies of Health Canada-approved vaccines, anxiety is rising over the country’s ability to meet national vaccination targets.

Just 36 per cent of Canadians now say they feel the federal government has done a “good job” in securing sufficient doses for the population, down 11 points from December, while the number saying “poor job” has nearly doubled.

Much of the responsibility for vaccination also falls on provincial governments, who are delegated to prioritize access and organize delivery.

Just 51 per cent of Canadians are confident in their respective provincial government to effectively do so, with proportions dropping below a majority in Alberta (35%), Manitoba (39%), and Ontario (44%). 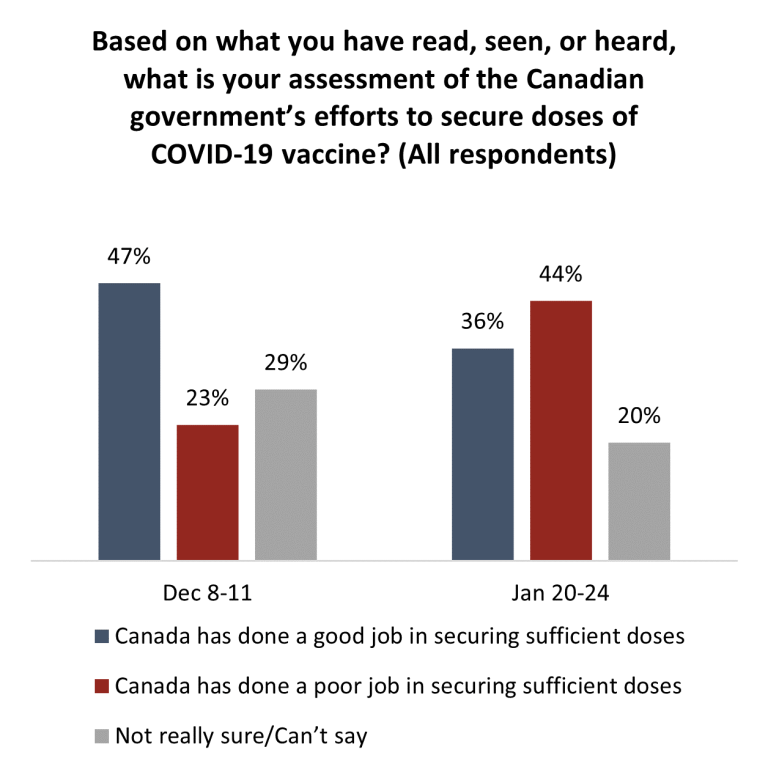