The decision has once again plunged Alberta into crisis mode economically. The province has already invested roughly $1.5 billion in the project, plus $6 billion in loan guarantees, leading Premier Jason Kenney to apply maximum pressure on Prime Minister Justin Trudeau to fight to revive the on-again off-again proposed pipeline.

Trudeau, however, must balance support for Alberta against public sentiment – deeply divided along regional lines – while also considering competing issues that also require attention and resolution from the United States.

Against this backdrop, new data from the non-profit Angus Reid Institute shows Canadians fully comprehend the blow this decision represents to Albertans. As Keystone joins the Northern Gateway, Teck Frontier Mine, and many others in a long line of cancelled or defunct energy operations, two-thirds (65%) of Canadians say Biden’s decision is a “bad thing” for the province.

But what should happen next? This question reveals profound regional divides, with majorities in Alberta and Saskatchewan saying if it were up to them, they would press the Biden administration to reverse course. Majorities in BC, Ontario, Quebec, and Atlantic Canada, however, are of the view that it is time to accept the decision and focus instead on other Canada-U.S. priorities. 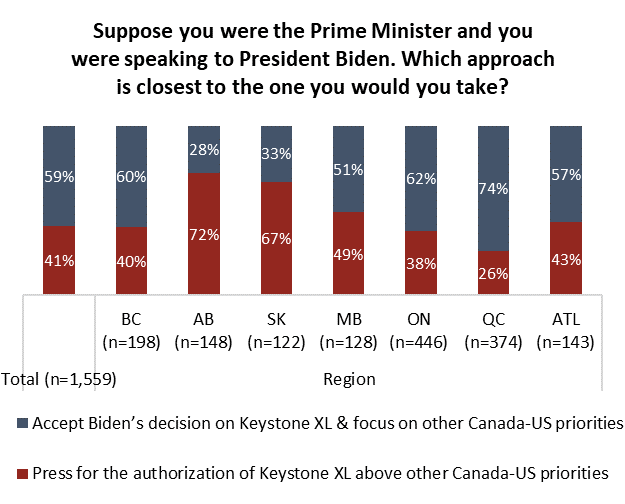