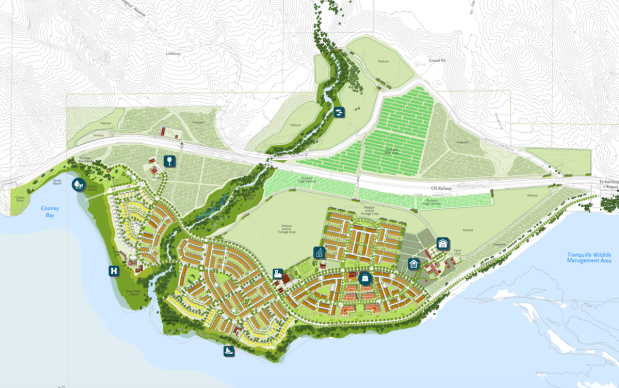 KAMLOOPS IS RUNNING OUT of buildable land, or so it might seem.  Which must lead to excitement by many with the revived plans to develop the lands at Tranquille on Kamloops Lake.  There are very few large parcels available to develop within City of Kamloops boundaries.

Already, there are online discussions about the loss of farmland to development for the new proposal.  But for me, it is not the farmland that would be the biggest loss if it was developed, but the fragile riparian zone between the Tranquille properties, and Tranquille Creek, Kamloops Lake, and the seasonal marshes that border Thompson River.

Some are arguing online that the farmland must be preserved.  But for me, what is more important is to ensure an adequate buffer to protect the riparian zone.

The proposed development at Tranquille is a unique ecosystem that encompasses lake, stream and marsh, as well as arid desert, and riparian vegetation.  The narrow strip of land that meets water is home to some of the most threatened species in B.C.

On my visits to Tranquille and Cooney Bay, I’ve seen Western Rattlesnake, American White Pelican and Western Grebe.  I’ve stood under the canopy of Black Cottonwood, walked through Big Sagebrush, and paddled my canoe through Three-Square Bulrush.  The rattlesnake is blue listed, while all the others are all red listed.

In B.C., a Red listed species or ecosystem is at risk of being lost (extirpated, endangered or threatened).  Blue listed species are sensitive or vulnerable to human activities.  The American White Pelican is officially listed as endangered.

In B.C., Red and Blue listed animals have protection.  It is illegal to harm, kill or capture them.  But the protection is meaningless if their habitat is destroyed.  If the habitat they require to live is bulldozed and disturbed to build housing, they will have nowhere to live.

Within the City of Kamloops there are 73 animals and ecosystems that are Red listed and another 135 Blue listed species.  Going down the list, it is obvious that Tranquille is home to many.  The pelican and rattlesnake, and other species are at Tranquille because it is one of the last viable places they have to live.  Or at least for now.

The City of Kamloops has been on the provincial government’s Species & Ecosystems at Risk Local Government Working Group since at least 2011.  The group provides ongoing education and resources.  There is an online tool for identifying species at risk within a municipalities.  The City has resources to protect species at risk.

One thing that City of Kamloops does is careful planning.  There are plans for roads, sewers and parks.  Somewhere down on the list is planning for species at risk.

When the plans for revised Tranquille development come to City Council, there will be maps for roads and parks, walkways and orchards.  It is highly doubtful that the proposal will include a detailed plan for species at risk.

It only takes a short time at Tranquille to see some of the most threatened species in our province.

When the development report comes to council, council should be demanding a Species at Risk report.  It should insist its staff list the species that will be affected by the development: not just the rattlesnake, pelican and grebe, but also the badger, barn owl, Merriam’s shrew, and Sandhill skipper and whichever other of the 208 species and ecosystems are within the footprint of the development.

For City council to be able to make the best decision on how to develop this project, the information on species at risk needs to be brought to council.  Otherwise it will be difficult to make decisions that will help preserve the riparian zone.

It’s time for Tranquille to find a new purpose, but it’s also time for the City of Kamloops Council to take their role in preserving species at risk seriously.