December 3, 2020 – As Canadians watch Britons and New Yorkers roll up their sleeves – literally – in preparation to receive much-coveted first doses of COVID-19 vaccines, lingering questions over when they themselves will be immunized are having a negative impact on how they perceive the federal government’s management of the pandemic.

New research from the non-profit Angus Reid Institute shows a slim majority (56%) says the government under Prime Minister Justin Trudeau has done a “good job” handling the crisis. However, this represents a 10-point decline from the last quarter.

This poorer assessment, however, does not appear to be affecting the PM’s own political circumstances. Half in this country (50%) approve of the job he is doing, a level unchanged since early September.

Trudeau continues to perform well ahead of his party, given the statistical tie the Liberal Party of Canada finds itself in with the Conservative Party on vote intention (34% to 33% respectively) – essentially where the two parties stood after the October 2019 election.

As the country looks towards a new year and an eventual end to the crisis that has taken lives, jobs, and hope from so many Canadians, the financial impact of COVID-19 has a massive impact on their outlook for 2021.

Those who have lost work or equity due to the crisis are nearly twice as likely to say they’ll be worse off next year than those who have escaped financially unscathed so far. 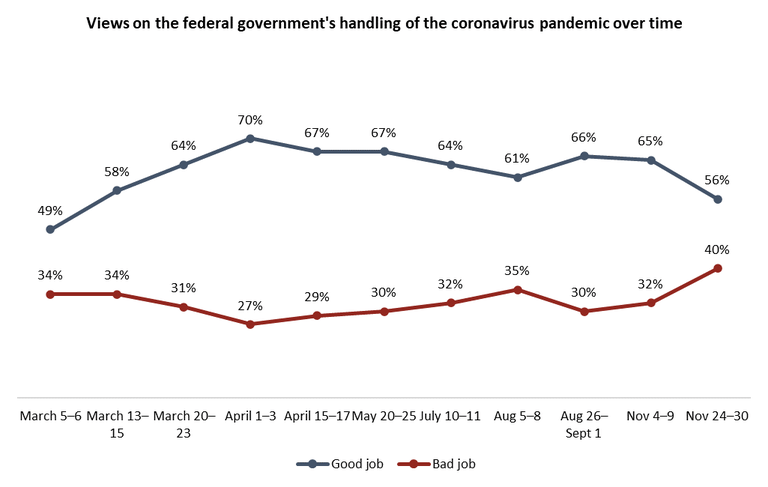