First appearing in 1972, the days of Laurier (also the namesake of a Coast Guard icebreaker, Wilfrid Laurier University, and numerous other schools, streets, and places) as the “face of the fiver” are coming to an end.

An independent federal advisory council has released its shortlist of the eight nominees to replace him sometime in the next few years. The latest study from the non-profit Angus Reid Institute finds that among the eight candidates, Terry Fox is named more than all others as the preferred new face, chosen by 57 per cent of Canadians.

While Fox is the top option in every region of the country, he is by no means a unanimous choice. Famed Indigenous soldier Binaaswi (Francis Pegahmagabow) is chosen by one-in-five (21%), including one-quarter of residents in Saskatchewan, Ontario, and Atlantic Canada. Crowfoot (Isapo-muxika), an integral part of Treaty 7 negotiations in Alberta, is chosen by one-in-five (19%) as well.

While Canadians across the country have their own preferences, there is also majority agreement on the change itself. More than three-in-five overall, and a majority in each region of the country, say it is a good idea to change the face of the five. But a significant segment, 37 per cent (including 57 per cent of past Conservative voters), disagree. 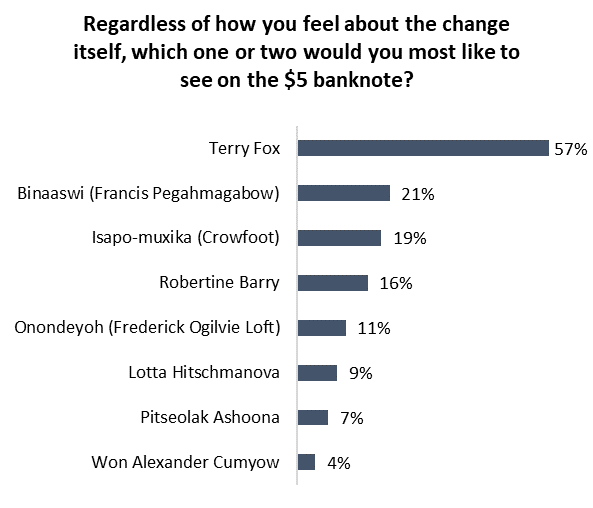 Link to the poll here: www.angusreid.org/new-five-dollar-bill/