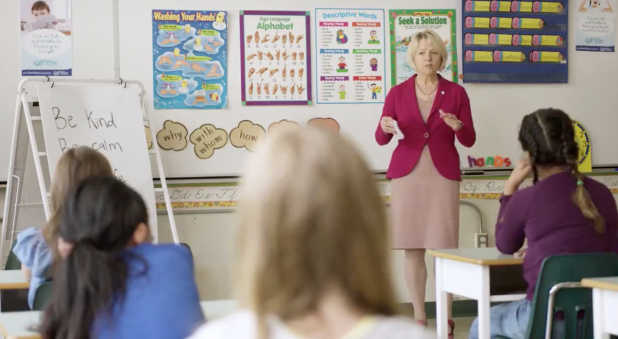 THE B.C. TEACHERS FEDERATION needs to get a life.

Its members — at least some of them, including president Teri Mooring — are unhappy about a TV commercial featuring Dr. Bonnie Henry, claiming it misrepresents the reality of what classrooms will be like when school goes back in next week.

It’s a simple little 30-second commercial. It shows Dr. Bonnie standing in a classroom talking to a few students. She says school will be different this year, with lots of hand washing and mask wearing, and staying together in smaller groups.

But OMG, that’s not the way it will be in many schools, say the teachers. Only six students were involved in the video’s classroom setting, when in reality there will be a couple of dozen in classes.

And some classrooms don’t have their own sinks for hand washing or even individual desks for each student. In some, the windows don’t open.

Oh, the horror. Surely, in 30 seconds, the government could depict all the varying circumstances that will exist in each school and in each classroom in the entire province. Give me a break.

As Dr. BH said Monday in response to the criticisms, “That was not a commercial about what a classroom is going to look like.”

Indeed, it was about changes to the learning experience in the context of the social distancing rules of the pandemic. It is not, as one teacher claimed, “misleading.”

To be sure, the original plan announced by Dr. Bonnie and Health Minister Adrian Dix was deficient but it’s been tweaked. The object of the TV blurb is not to outline that plan, but to re-iterate the old message of the need to be very careful in all things, and that includes going to school.

The BCTF should chill out.