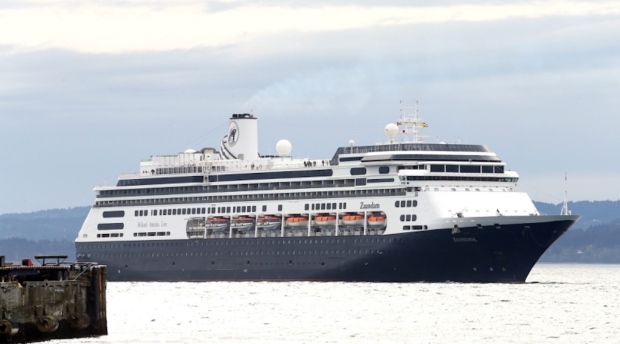 IN ALL HONESTY, says Metchosin’s David Kirkham, there are worse places to be trapped than a cruise ship off the coast of South America.

There has been no sign of COVID-19 aboard Holland America’s MS Zaandam. While the ship wasn’t allowed to dock at Valparaiso, Chile, on Friday, it did take on fuel and provisions. As it sails north for who-knows-where, David and wife Norma feel pretty fortunate.

“Our philosophy is ‘better to be on a ship that has no disease than to go on land and risk being exposed’,” David said.

Other Canadians on other vessels aren’t so lucky. The Kirkhams are among what Ottawa says are up to 4,000 citizens on 70 cruise ships around the world. Their future is uncertain as port after port refuses access, borders are closed and flights are grounded.

Cruise-ship passengers aren’t the only ones wondering how they’ll get back to Canada, of course. There are those like Victoria’s Chris and Jenny Foord, on Roatan Island off the coast of Honduras.

They spend a couple of months there every year. It’s a lovely place to be self-isolated, Chris said, but it’s hard not knowing when they’ll be able to return to Vancouver Island.

“We are safe, well stocked with food but completely in limbo about when we can get home,” he wrote Friday. “We have a WestJet ticket for March 29, but WestJet has cancelled all flights for a month.

“We have a ticket on United for March 27 to go to Houston and Vancouver, but don’t know if United will be flying into Roatan next week. We could also get stranded in Houston for awhile with airlines cancelling flights and borders closing down. … If we do not get out next week then we will probably be here for the next month or more.”

Chris praised the Honduran government’s aggressive approach to the virus. Everything has shut down other than food stores, pharmacies and clinics.

An 8 p.m. curfew is in effect. Communications from the government are excellent. But no, this is not the trip they had planned.

Nor is it what the Kirkhams, who are retired, had in mind when they left Buenos Aires on March 7 on what was to be a month-long cruise. The Zaandam, carrying 1,256 passengers and 585 crew, was to round the tip of South America before working its way up the west coast, sailing through the Panama Canal and arriving in Fort Lauderdale, Florida, on April 7.

All was fine until they left Punta Arenas, Chile, on March 14. Their next destination, in Argentina, didn’t want them to land. Nor did anywhere else. After Friday’s reprovisioning, their captain’s plan was to keep heading north.

“I guess we’re a ship at sea without a friendly port,” David said.

It’s a weird sort of limbo. They have plenty of food. Holland America has provided free phone service. The first happy-hour drink is full price but the second is $2. The Kirkhams have supper with a couple from Sooke each evening.

Several people from Nanaimo are on board, too. David tries to walk several mile-long laps around Deck Three each day. “There’s no serious angst that I can see,” he says.

It’s just that they have no idea where they’re going. The odds might be on Fort Lauderdale, from where they are supposed to fly home April 7.

That would leave them in better shape than others. On Friday, Canadian Press reported that 70 Canadians were trying to figure out how to get home from Atlanta, Georgia, where they had been flown on a U.S. repatriation flight after being taken off a cruise ship in France.

And they were better off than the 340 Canadians aboard the Norwegian Jewel, which has been turned away by Fiji, French Polynesia, New Zealand and Hawaii.

Then there are those who are back in Canada, but still waiting to get home.

On March 10, the federal government chartered a plane and flew 228 Canadians, passengers on Princess Cruises’ COVID-struck Grand Princess, from California to Trenton, Ont., where they were put in a two-week quarantine at a military base.

Among those passengers was Brian Losie, who wrote the Times Colonist with concerns about what will happen when those passengers are freed from their quarantine. They have been well-treated at Trenton, he wrote, but no one seems able to offer assurances that, once sprung, they will be protected from the virus while journeying to where they actually live. For example, will there be medical screening, or seat assignments made in accordance with social distancing?

All of which might lead the rest of us, cooped up in our homes, to ask: Where would we rather be?

1 Comment on KNOX – Would you rather be trapped at home, or on a cruise ship?