March 11, 2020 – As Canada records its first COVID-19 related death, the latest tracking survey data from the non-profit Angus Reid Institute finds the number of Canadians who now see the threat of this virus as “real and serious” has spiked significantly over the last month.

Two-in-five (42%) Canadians now say this, compared to fewer than one-third at the beginning of February, while the corresponding number who see the situation as “overblown” has softened.

Heightened sensitivity to the risks and effects of the novel coronavirus comes as the spread of the infection takes hold in more countries, as well as communities within Canada itself.

Indeed, as more cases are identified in Canada, 40 per cent now say they are worried about personally becoming sick from the illness, an increase from 30 per cent last month.

As major events, including sporting events such as the IIHF world women’s hockey championship are cancelled or postponed, three-in-ten Canadians say they would not attend a concert or sporting event right now, or even go to an airport.

That said, Canadians appear relatively confident in the response of their governments. Half say the Trudeau government has done a good job (49%) of handling the crisis. Further, the two provinces most affected by the COVID-19 outbreak – British Columbia and Ontario – offer net-positive views of their own provincial governments’ actions. Nearly two-thirds (62%) of those in B.C. say the Horgan government has done a “good job,” while in Ontario, 46% say the same about the Ford government’s reaction. 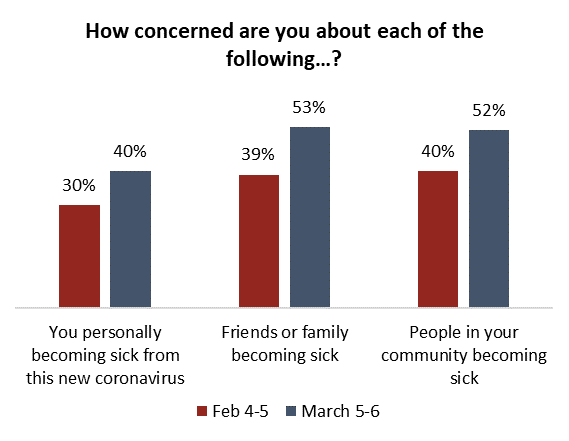