February 27, 2020 – As mass arrests and burning tires along rail lines define the state of developments in a country-wide series of blockades in protest against a $6.6 billion natural gas pipeline being built by Coastal Gaslink in northern B.C., Canadians are profoundly divided over how to handle the situation.

A new study from the non-profit Angus Reid Institute, conducted Feb. 25-26, finds nearly half (47 per cent) say patience and dialogue with those opposed to the project is the best way to resolution. The other half (53 per cent), however, say that these blockades should be brought down using whatever force is necessary.

These two perspectives strongly correlate with lines of demarcation over what Canadians believe to be the most important aspect of the ongoing conflict. Just over half (56 per cent) say it is economic issues or the rule of law. Just under half (44 per cent) instead say the most important aspects are either Indigenous or environmental issues. Each takes a markedly different view of how the blockades should be handled.

Whatever side of the issue they are on, Canadians agree that Prime Minister Justin Trudeau has not handled the crisis well. Just one-in-five Canadians (21 per cent) say that the Prime Minister has done a good job (a mere three per cent say “very good”). 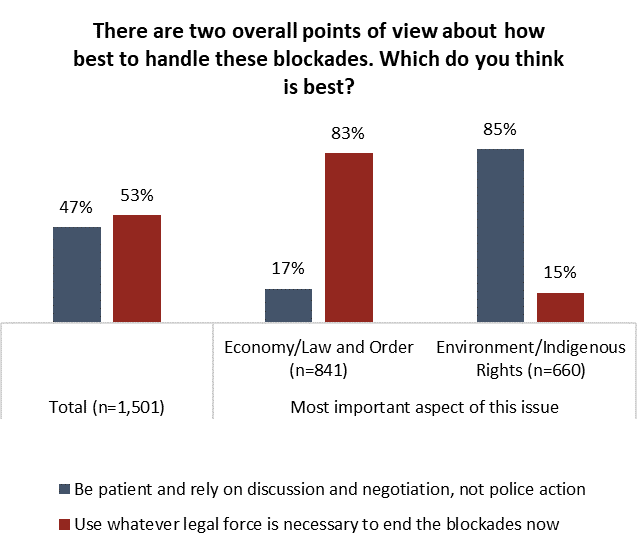 4 Comments on NATIONAL PULSE – Half call for patience, half support use of force