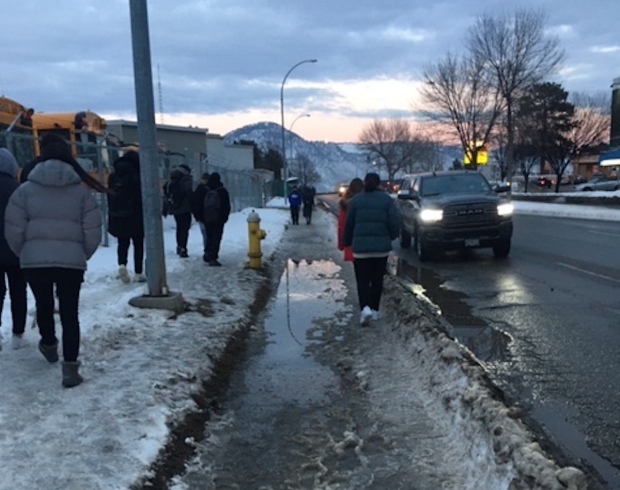 The goal of the group is to reduce carbon emissions by improving low-carbon mobility options.  More specifically, they want to improve pedestrian, cycling and transit options in Kamloops.

Last week, KALCAT had its inaugural meeting, at which a board and working groups were formed.  Bravo!

Now City Hall might argue things are in the works.  There is a Pedestrian Master Plan, a Bicycle Master Plan and a Transit Master Plan.  They might say things are proceeding as planned.

The only problem is, the plans aren’t enough.  Even with the City’s plans in place, it doesn’t take much effort to see that the car is king in Kamloops.

Take for instance the road on McGill Road between Columbia Street and Summit Drive.  This road’s sidewalk could easily be the busiest section of sidewalk in all of Kamloops.  This sidewalk is used by hundreds, if not thousands of students and staff going to and from Thompson Rivers University daily, as well kids and their parents going to Beattie Elementary, and others.

In the mornings and afternoons, there is literally more foot traffic along this stretch of road than vehicles.

It’s hard to believe that the City of Kamloops gives any mind to pedestrians if this sidewalk is the measure.  Although the City’s own website says they clear the snow on this sidewalk, it is rarely, if ever plowed.  When the snow melts, or rain falls, huge puddles form on the sidewalk because of poor drainage.  In the mornings, with large groups overflowing the sidewalk, people stand in mud at the Summit Drive crossing.

When even the busiest sidewalk in Kamloops has such little care and attention from the City, the bar does not need to go up far for there to be an improvement for pedestrians.  Somewhere in a plan, there is mention of improving the McGill Road corridor, someday, perhaps.  But activists like KALCAT will make it happen sooner.

Transit users need a strong advocate as well.  Take a drive down Tranquille Road on a Sunday afternoon.  At every bus stop, there is 2, 5 or 7 or more people waiting for the bus.  Not at one or two stops, but bus stop after bus stop.

By the time the bus picks everyone up, it’s at capacity.  The Tranquille bus runs every 30 minutes on Sunday afternoons, so it’s not even that convenient.  But people are still taking it.  Imagine how much more it would be used if this bus was actually convenient, and came every 15 minutes on a Sunday, like it does during the weekdays.

The Transit Master plan won’t solve this, because the City of Kamloops is at the behest of BC Transit.  The City only adds capacity when BC Transit gives it extra hours.  What will solve it is grassroots, activist pressure.  What will solve it is when City of Kamloops, BC Transit and ultimately the provincial government feel the pressure of KALCAT and others, and finds the political will to expand transit in Kamloops.

Cycling connectivity on safe routes is an ongoing issue in Kamloops.  For example, there is no way, aside from the highway, to get from Dallas to Valleyview.  Piece by piece the cycling infrastructure is being built.  But until that happens, many in Kamloops do not feel comfortable riding in traffic.  Too many parts of the city have no bike paths and aren’t useable by many cyclists.  Safe bicycle paths are a huge incentive. The Dutch have 35,000 kilometers of cycling paths.  One-quarter of all their trips are by bicycle.

Activism creates political will. The KALCAT could well create the political will to get more cycling paths more quickly in Kamloops.

Good on the KALCAT organizers and the people who’ve joined them.  I wish them well.