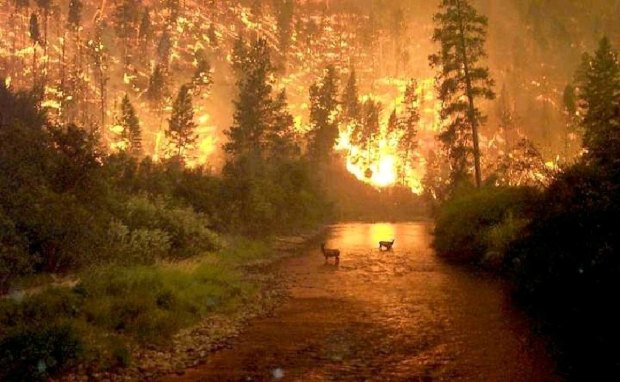 The August long weekend is known for more than B.C. Day. Unfortunately, it’s also sometimes the turning point in the wildfire season, when a relatively calm year can suddenly turn very hot.

While this summer hasn’t exactly been quiet — the number of wildfires in the province is about “normal” — the number of hectares is considerably lower at this point compared to some previous seasons.

Electoral Area P (Rivers and the Peaks) has seen little wildfire activity over the past few years in comparison to some other parts of the TNRD but memories of the massive Elephant Hill fire in the Ashcroft-Cache Creek area will haunt us for years.

That fire, and past summers filled with smoky skies, have had a strong impact on B.C.’s image in the minds of prospective visitors. According to a report to the TNRD board by the Thompson Nicola Film Commission, the events of 2017 and 2018 attracted worldwide attention to B.C., and not in a good way.

While the Elephant Hill fire encompassed 192,000 hectares (dwarfing the 26,000-hectare McLure fire of 2003) it still amounted to only four per cent of the TNRD’s land mass.

“Feedback from stakeholders tells us that the current public perception (recently and endlessly promoted by the media) is that the entire B.C. interior has been burned and that skies are always smoky,” the report continues.

I would disagree that the major blame should be put on the media but maybe that’s my media background speaking. I do think, though, that people from away have drawn their own conclusions based on media coverage of the fires, and those conclusions are often exaggerated.

Regardless, the conversation needs to be changed back to one of reality.

“We need to change the negative narrative and our image, and promote the vibrancy and beauty that still exists, and is continually evolving. We need to show that recovery is happening, and that the TNRD is rising above the ashes and mud.”

Thus, the report indicates two narratives: one that the vision of a B.C. and TNRD going up in smoke is erroneous, and the other that it is resilient in the face of the challenges it’s been facing.

There’s actually an opportunity, according to the report, to capitalize on “landscape changes” by marketing to film and TV productions that require the kind of barren landscape left behind by the fires.

One way the film commission wants to attract such interest is by shooting aerial footage with drones to capture the diversity of the terrain, including the areas in the process of rebuilding.

That, says the commission, will demonstrate that the TNRD is safe and open for business.

Living here, we naturally see things as they really are and tend to forget that would-be visitors have a different lens — the images provided by media in times of crisis.

Here’s hoping for an uneventful rest of the summer. In the meantime, though, we’ve got a job to do in reassuring the rest of the world that Interior B.C. is still a fantastic place to visit and to do business.

Director Mel Rothenburger can be contacted at director.mrothenburger@tnrd.ca.