July 5, 2018 –  The drama of the world’s most-watched sporting event is alternately breaking hearts, and taking Canadian fans’ breath away. Over the past three weeks, World Cup viewers have gone from the heights of elation to the depths of despair, depending on the fortunes of their favourite teams.

And, while the “beautiful game” is by no means Canadians’ preferred choice of sporting event to watch when compared to hockey or the Olympic Games, a new Angus Reid Institute survey finds a significant segment of the country connecting with the 2018 FIFA World Cup.

While this report may be hard to read for Japanese fans still grieving a last-second Round of 16 loss to Belgium, plenty of Canadians are able to cheer their team of choice into the quarter-finals. England and Brazil emerge as Canada’s favourites for the rest of the tournament, and undoubtedly bar-owners across the country too. More than half of those who are interested in the tournament report watching a game at a bar or restaurant.

The big draw for many Canadians, however, is 2026. Along with Mexico and the United States, Canada recently won a joint bid to host the World Cup in eight years. The number of Canadians who are interested in that tournament jumps to just under half (46%) from the 37 per cent who say they are watching currently. 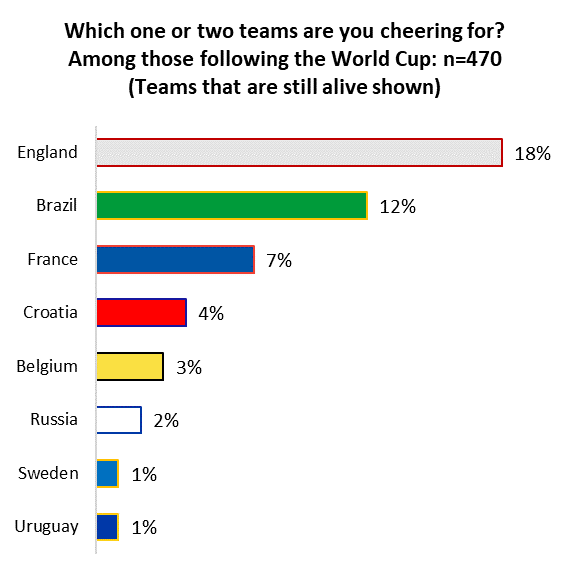 Link to the poll here: angusreid.org/fifa-world-cup-russia