June 22, 2018 –  In 1930, it seemed like a forgone future. Influential economist John Maynard Keynes seemed certain when he wrote in his Economic Possibilities for our Grandchildren that a 15-hour work week was almost inevitable in Western societies within 100 years.

Today, however, Canadians would settle for far less.

Indeed, a new study from the Angus Reid Institutes finds that while a three-day work seemed like a real possibility to a significant portion of the population 50 years ago, that dream has all but vanished in 2018.

That doesn’t mean Canadians don’t want to work toward it, however. Close to half of Canadians (47%) say that moving to a 30-hour work week from 40 hours is a good idea. Notably, the size of the group saying the opposite – that this is a bad idea – is less than half of what it was in the 1950’s and 60’s, down to just three-in-ten (31%).

Further, if they have to continue to work a standard 40-hour week, seven-in-ten (68%) now say they would prefer to condense it into four 10-hour shifts rather than five eight-hour segments. This represents a 25-point rise in the number of Canadians who said so in 1981. 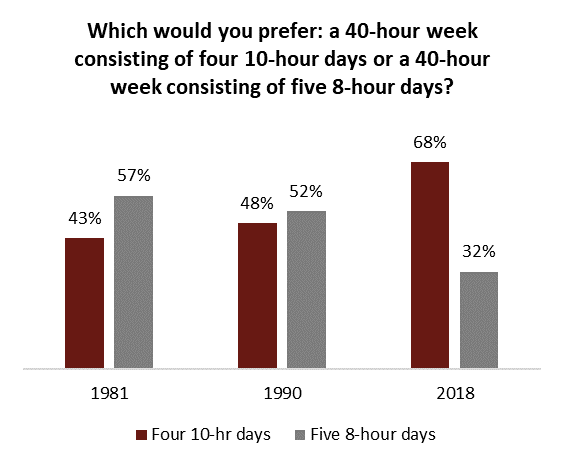 Link to the poll here: http://angusreid.org/canadian-work-week/