November 30, 2017 – It’s policy crunch time across Canada. With a July 1, 2018 deadline looming for provinces to have a plan in place for marijuana legalization, some government officials have admittedly been scrambling and publicly calling out Ottawa over a timeline they say they aren’t able to meet.

A new Angus Reid Institute study finds more than half of Canadians – including six-in-ten in Quebec and Ontario –  say that they aren’t sure their provincial government will be ready in time.

Further, despite two-thirds support for legalization, nearly half want Ottawa to push back the legalization date to give provincial governments more time to prepare.

This is not the case, however, on Canada’s coasts. Seven-in-ten each in Atlantic Canada and BC say the timeline should stay in place. 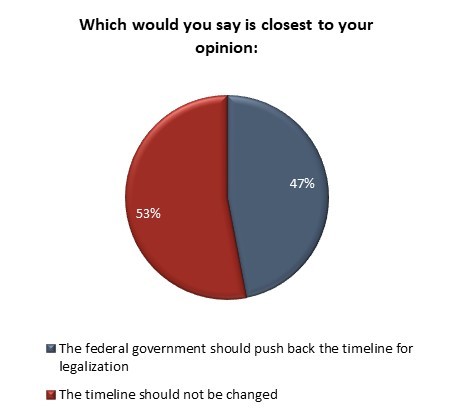 Link to the poll here: www.angusreid.org/marijuana-timeline-provincial