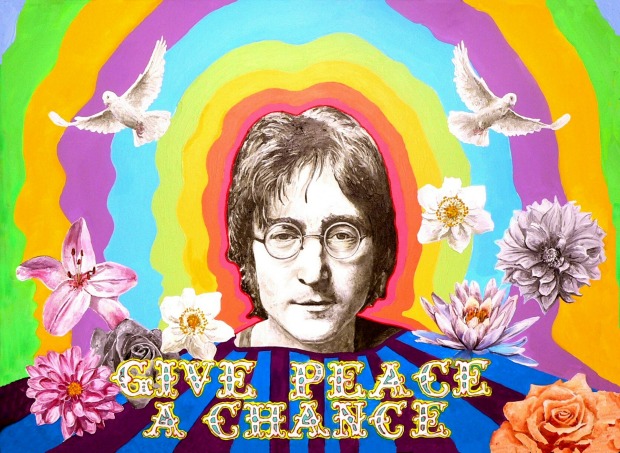 John Lennon’s “Give Peace a Chance” wasn’t released until 1969 but it captured the spirit that began in 1967. (Image: Pixabay.com)

IF YOU’RE a certain age, you’ll remember 1967’s fabled Summer of Love. Thousands of young people flocked to San Francisco where, often with the help of illegal substances, they created an oasis of idealism, peace, creativity and good vibes. Or so the story goes.

It was a time when terms like love-in and be-in entered the general vocabulary, and hippies were briefly hip. To borrow from one of the biggest songs, “If you’re going to San Francisco, be sure to wear some flowers in your hair.”

The Beatles’ Sgt. Pepper’s Lonely Hearts Club Band, released at the beginning of June, was the touchstone of the summer’s popular culture. And it was socially advantageous to talk about the album enthusiastically, even if you didn’t really care for it. Although “tell it like it is” was the mantra, too much honesty could be unwise.

As the Summer of Love’s prelude, the first be-in took place in San Francisco on Jan. 14, 1967, featuring the likes of Timothy Leary and the poet Allen Ginsberg. Leary – famous for the phrase “turn on, tune in, drop out” – was a psychologist, an LSD user and a believer in the mind-expanding properties of psychedelic drugs. The man and the moment were made for each other, so much so that LSD has been called “the hippy communion wine.”

People across the globe, of all classes, loved the music but could live without the hippy idea, thank you very much

When 20,000 to 30,000 people showed up for the be-in, a new media sensation was born. Suddenly, the hot topic was the counterculture and its explicit rejection of conventional middle-class values, the latter being freely disparaged as conformist and materialistic. And to explain the significance of it all, earnest professors were in demand for TV, magazine and newspaper interviews.

Obviously, the be-in phenomenon wasn’t going to be confined to California. Canada dipped its toe in the pool a couple of months later, with Vancouver’s Stanley Park as the venue on March 26, 1967. Looked at now, the CBC’s coverage seems positively quaint.

Outside the bubble, though, things were more complicated. The world wasn’t conforming to the new love and peace dispensation.

Driven in significant measure by the demographics of the post-war baby boom, North America was in the midst of a sharp upsurge in crime. Ironically, while the media talk was about San Francisco’s gentle people and flower power, the seeds of law and order politics were being sown.

And war was conspicuous by its presence.

In addition to the ongoing quagmire in Vietnam, there was the Six-Day War in the Middle East and the onset of the Nigerian Civil War. Largely forgotten now, the latter was especially brutal. When it was over, an estimated one million civilians were dead, many of them casualties of the infamous Biafra famine.

Reviewing a new book on the period for the Times, English academic John Sutherland is quite scathing. After quoting socialist playwright Arnold Wesker’s characterization of hippies as “pretty little fascists,” Sutherland goes on to note that “psychedelia had nothing to offer the working class.”

Rather than being a mass movement, it belonged to “well-educated, smart, white, male kids. People across the globe, of all classes, loved the musical accompaniment. Most could live without the hippy idea, thank you very much.”

If that sounds a trifle harsh, it’s still eminently reasonable to wonder about the significance of it all.

Did the Summer of Love, hippies and psychedelia move the social needle in any material way?

Or was it merely a media confection, albeit a confection that’s periodically taken out for inspection and stroking?

There’s no doubt that social mores regarding sex and recreational drugs have moved some considerable distance towards the hippie position over the last half-century. But that’s perhaps more coincidence than causation.

As for the political significance that many early commentators prophesied, the idea that 1967 San Francisco represented the cutting edge of a youth-led left-leaning revolution was, to put it gently, illusory. When the U.S. lowered the voting age to 18 in 1972, the newly enfranchised youngsters opted for Richard Nixon.

I’ll leave the last word to Sutherland: “All you need is love? Codswallop. Try buying your morning coffee and bagel with love.”

Pat Murphy casts a history buff’s eye at the goings-on in our world.

2 Comments on MURPHY – The Summer of Love in 1967 was a media event, not a revolution