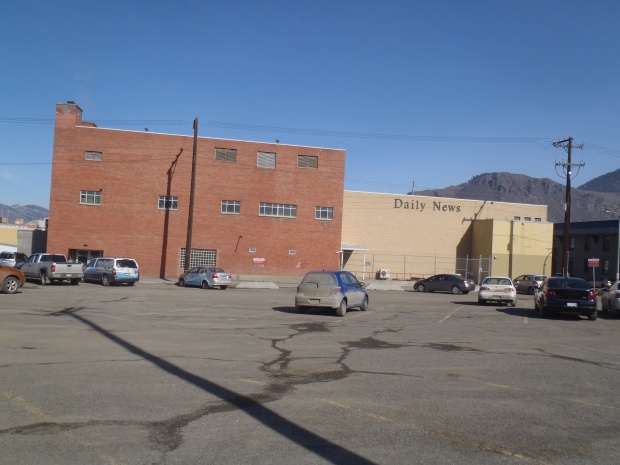 A sampling of comments about the City’s decision to tear down the Kamloops Daily News building and put in a parking lot.

Don Reid: I am not against tearing the building down as obviously the costs to renovate are high — so until a better use comes along level the building pave it over and make parking — but let’s not spend millions of tax payers $$$ building another multi-level parking lot that won’t be fully used – living downtown we all know there is lots of parking available if you are willing to walk a block or 2 — at night there is no lack of parking. There is no growth or retail downtown and with empty space coming up when Value Village moves there will be even more empty space. Walking up and down the streets I see so much empty space as businesses move up the hill — and it’s not due to parking.

Grouchy1: The city should have left well enough alone to begin with, and left tax dollars in the bank instead of buying this white elephant .

Manorly: “Rumour has it” that some wax museum (50 years in Victoria) folks were in town a summer or two ago asking questions about the vacant building, but were dissuaded from pursuing the location as “it was sewn up” already.

Dennis Giesbrecht: I’m not sure paying $1.6 million above assessed value for a building that was empty for 2 decades before the newspaper moved in was such a good deal. Now with the multiplex empty for decades, KDN building dead and Value Village about to become vacant, land downtown isn’t really in short supply.

Yanni Giftakis: Is this to get ready for the performing arts centre?

😀
That would be great, as the centre will need some good parking space.

David Johnson: City should be razor clear that the future sale price, for the soon to be parking lot property … will include the absorbed cost for asbestos removal. The only reason it didn’t sell, is developers didn’t want the dismantling cost.

Shirley Kimery: It clearly needs to be something! At least until we all figure out a better something!

1 Comment on YOU SAY – A great big, half empty parking lot; way to go City council