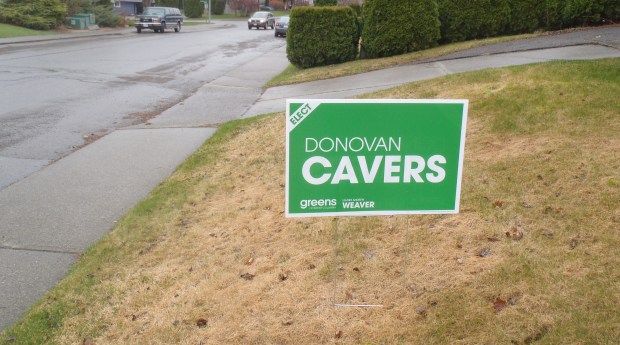 The grass isn’t green yet, but the signs are.

One day after the B.C. election campaign officially started, election signs are slowly taking root but they aren’t exactly sprouting like spring crocuses. A trip up the Yellowhead today (April 12, 2017) revealed that Barb Nederpel, the NDP’s Kamloops-North Thompson candidate, is the only one in the fray to have erected any signs between Kamloops and Barriere so far. And there were only a half dozen or so. Meanwhile, quite a few lawn signs for Kamloops-South Thompson Green candidate Donovan Cavers have been planted in Sahali. Lawn signs are generally regarded as the most important election signage because they indicate a committed vote by whoever owns the lawn.

…. Renters in Kamloops will benefit from the $400 renter’s rebate announced today by NDP leader John Horgan, say the party’s candidates in Kamloops-South Thompson and Kamloops-North Thompson.  “Christy Clark has only been working for her rich donors, but this announcement will help average people in Kamloops neighbourhoods,” Barb Nederpel, the North valley candidate, said. In addition to the $400 a year renter’s rebate, Horgan announced that an NDP government will close loopholes that let bad landlords impose big rent increases by abusing the vacate clause in fixed-term leases and increases based on neighbourhood prices. Nederpel and Nancy Bepple said in a joint press release that details and costing of the rebate program will be released when the NDP’s full platform is released Thursday.