NEWS/ POLITICS — Regardless of the fact he grew up on Vancouver Island and is not affected by the outcome of the proposed Ajax open-pit copper mine outside of Kamloops, the aspiring head of the B.C. New Democrats is siding with those calling for a full federal panel review of the project. 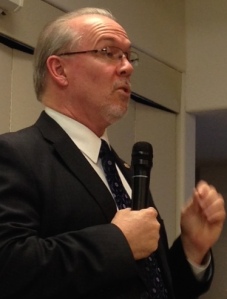 John Horgan, who is counting down the days to be acclaimed as the party’s new leader at 5 p.m. on May 1, believes the federal panel review is needed to create certainty around the decision of whether Ajax proceeds.

“The full panel is required because the public needs full confidence,” said Horgan, who has worked in a pulp mill and favours resource development — if science determines it’s a good proposal.

“The process has to be legitimate in the public mind.”

Horgan criticized the two Liberal representatives for Kamloops — Terry Lake and Todd Stone — for not getting that panel review for citizens who have been demanding it. He said Lake especially, as former environment minister and now as health minister, should have concerns about Ajax in view of those two portfolios.

While he hasn’t been to the mine site himself, his colleague Rob Flemming has and explained to Horgan it’s 1.5 kilometres from a school and homes — a proximity that doesn’t make sense. However, he said, the company should have the right to go through the process — even though Horgan said he’d commit to backing the community.

“I will stand with you through this process. It’s what I’ve been asked to do.”

Horgan spoke to a room of about 65 party faithful at Desert Gardens tonight (Tuesday), many wearing anti-Ajax buttons. Among those gathered were three candidates in the last provincial election that the NDP were supposed to win as easily as taking candy from a baby: Kamloops South’s Tom Friedman, Kamloops North’s Kathy Kendall and Fraser-Nicola’s Harry Lali.

Relaxed, joking and obviously enjoying his tour of B.C. without having to go after another leadership candidate, Horgan didn’t back away from contentious issues that have plagued the NDP. Even the fast ferry fiasco got a mention and a few pokes as Horgan teased that his handlers didn’t want him to mention the overspending scandal.

But he also threw in the B.C. Liberals’ own over-budget projects such as the Port Mann Bridge and the B.C. Place roof, and Crown corporations, which Horgan described as being in crisis. He named the B.C. Lottery Corp., B.C. Ferries, B.C. Hydro and ICBC.

As the NDP’s energy critic, Horgan has put B.C. Hydro’s plans for the Site C dam under the microscope. He said the Crown corporation’s huge losses are due to overproduction and that’s prompting a rise in rates. Horgan is conflicted about the dam; on the one hand, the Peace River already houses two other dams. On the other, there’s no need for the power at this time and there are impacts.

It’s too complicated to give a simple yes or no to, he said.

The lack of leadership challengers has created a quiet tour rather than a raucous round of debate, but Horgan doesn’t mind. While he loves a good debate — he laughed as he talked about some of his moments debating Kevin Krueger in the legislature — he also realizes a leadership battle can create division in-house.

Friedman supported Horgan as leader in 2009 because of his candour and “that certain something,” he said.

“He listens and that’s so critical.”

Lali is a Horgan fan, too.

“He’s very honest, passionate about life and politics,” he said.

Horgan isn’t afraid to go after the Liberals and their actions, nor is he afraid to tackle the tough issues, he said.

“John deals with things and moves on.”