EDITOR’S NOTE: Earth Hour, today at 8:30 p.m., focuses on reducing our energy consumption but its concept is a broad-based commitment to our environment. Following is a new instalment in a series of articles by TRU economics Prof. Dr. Peter Tsigaris on ideas and issues.

Temperatures were 10 degrees above normal across Yukon, Nunavut and the Northwest Territories. Kugluktuk in Nunavut hit 29 degrees Celsius. The article also states that “residents are not complaining.”

Is this really happening or is this only a one-time weather event? In order to shed light onto this issue, I downloaded data from 84 meteorological stations around Canada from a University of Chicago database for the period 1970 – 2013. Anyone can access my calculations by visiting: http://climatemodels.uchicago.edu/timeseries/ .

This period is selected because science considers it the “smoking gun” period. Smoking gun refers to the inability of climate models to explain the observed global warming based on natural forces only. Most of the observed temperature increase is extremely likely caused by greenhouse gases released from human activity (IPCC, 2013).

The stations were divided into four regions as shown in Figure 1. The northern region was composed of Yukon, Northwest Territories, Nunavut and northern parts of Quebec (e.g., 60 degrees latitude north and higher).

The west was assigned to British Columbia, Alberta, Saskatchewan and Manitoba. Central Canada was allocated to Ontario and Quebec. The fourth region was the Atlantic Provinces. The northern region had the highest trend temperature increase of 0.49 Celsius per decade.

This trend is significantly different from the rest of the stations which had a trend increase of 0.37 Celsius per decade. Noticeable is the slower but still significant upward trend for the Atlantic Provinces. 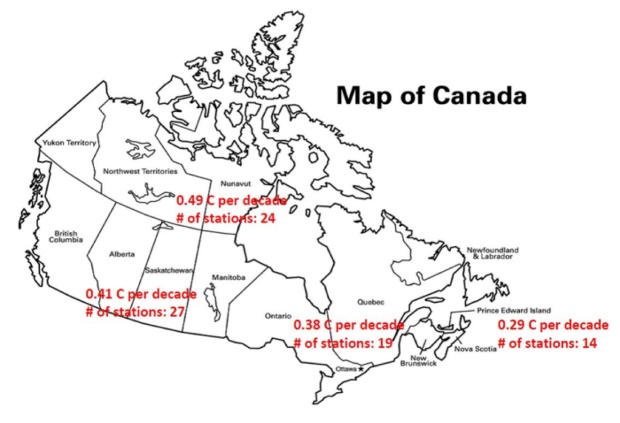 Kamloops is experiencing a warming of similar magnitude as the Canadian North during 1970-2005 as indicated in Figures 2 and 3 (see also Tsigaris, 2013). Kamloops experienced a 0.06 Celsius per decade warming during the 1900-1970 period.

This is not a one-time event but a trend that started around the ‘70s. Science links the temperature increase around the world to the increase in the greenhouse gas concentration caused by emissions from the burning of fossil fuels and land use changes that drive economic activity.

Although some residents are not complaining now, scientists are warning that the consequences of climate change will be severe for humanity if we continue with business as usual (Stern, 2008; Hansen et al., 2013).