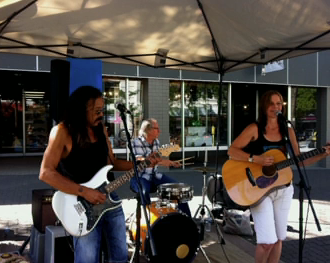 More street performances are part of the KCBIA’s vision.

Gay Pooler, manager of the Kamloops Central Business Improvement Association, painted the picture with photos of what other cities have done, saying there are many facets to making a downtown core a place for people.

She said it needs to be safe, clean and friendly, with a minimum of regulatory barriers.

“If they’re looking to come to Kamloops, no matter where they’re going to set up they still look to the downtown,” she said of new businesses.

Pooler said there are now 17 murals in the downtown area and they’re “a real visitor attraction. Our plan is to expand on the alley program including getting more murals up.”

The use of sidewalks is important for downtown merchants, she said, and work has been done to manage sidewalk space.

Hosting even more events and encouraging street performers is also a goal. Food trucks will be looked at, as well, but Pooler said location is important.

She said there are several locations where more public spaces could be created, too. ““We will work to bring together partners for the creation of new public spaces on both private and public land.

“Our long-term goal is to have a permanent new gathering place in the downtown core.”

The CAP team has been a summer program staffed by students for several years but Pooler said it could run during the winter part-time as well if funding can be found. “They might not necessarily just be students.”

Council approved the association’s 2014 budget, with that 50 per cent of the $199,000 business improvement association levy to be paid by next month, and the remainder in June.