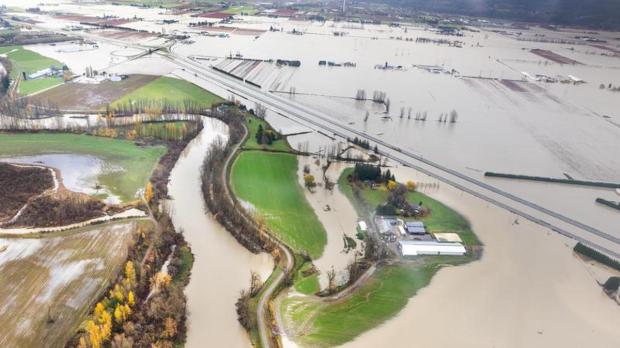 Flooding in Fraser Valley, November 2021. (Image: Govt of BC)

I’D LIKE TO FEEL OPTIMISTIC that we can limit the amount of carbon we are pumping into the atmosphere but a number of things are conspiring against a target of 1.5 C.

In the end, a pretty timid agreement, a “loss and damage” fund was established with no money in it.

What delegates at the COP27 conference didn’t say was deafening.

They failed to build on the pledges made a year ago at COP26 in Glasgow to eliminate coal. In effect, oil and gas has been given a new lease on life.

They struggled to prevent COP27 from being the conference where the target of 1.5 C dies. But I have to wonder. The target is on life support.

In the face of our conspicuous climate emergency, the target of 1.5 C was supposed to slow the cauldron of ever-rising, heat-trapping carbon emissions. The target refers to the goal, set out in the 2015 Paris climate agreement, to limit global average temperature increases to 1.5 C above preindustrial levels.

Most climate scientists agree that allowing temperatures to rise beyond that level will destroy some low-lying countries as polar and mountain ice melts and water levels rise – and even pose an existential threat to the whole planet.

Delegates made no fresh pledges to ramp up their carbon-reduction plans, nor did the final statement call for the phasing down and eventual elimination of all fossil fuels.

Calls at the conference to keep 1.5 alive were futilely repeated. On the day before the official end of the conference, the Brazilian head of climate and energy policy for WWF International, said: “This cannot be the COP where we lose 1.5. … It is in danger, and we need an energy transition fast.”

The Foreign Minister of the Marshall Islands said allowing temperature increases to surpass 1.5 degrees would deliver a “death warrant” to his Pacific island country.

One of the things that’s put a target of 1.5 C in doubt is Russia’s invasion of Ukraine. Europe, on the road to green energy sources, hit a detour. Germany had invested heavily in wind and solar energy with natural gas from Russia as backup.

The disastrous effects of a rise in 1.1 C has already been felt. B.C. has suffered from a trio of disasters: wildfires that decimate land and contribute to respiratory disease; the heat wave of 2021 that resulted in the death of 619; the atmospheric river -Canada’s 8th worst natural disaster- cost $675M in insurance losses and $1 billion to repair the Coquihalla.

Twenty-seven per cent of the greenhouse gasses that we produce comes from transportation. One-half of that comes from the vehicles we drive to work and to go shopping.

Most discouraging, our car culture is built into society. Suburbs are dependent on cars. Public transit is not an option for many.

We are locked into an increasing consumption of fossil fuels and the concurrent greenhouse gas emissions.

It’s hard to see how we can limit carbon emissions to 1.5 C when the burning of fossil fuels is built into our way of life.

1 Comment on CHARBONNEAU – Is the 1.5C target on climate emergency still possible?