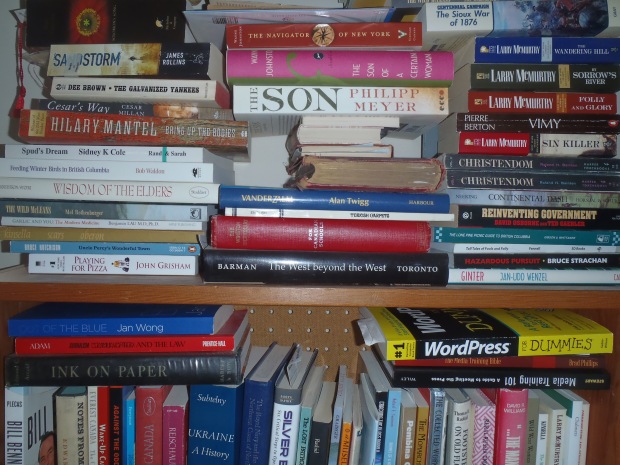 News item: People who read more than 3½ hours a week lived 23 months longer than those who didn’t read at all, according to a study published in the journal Social Science and Medicine.

“People who report as little as a half-hour a day of book reading had a significant survival advantage over those who did not read,” the New York Times quoted the study’s senior author, a Yale professor, as saying. “And the survival advantage remained after adjusting for wealth, education, cognitive ability and many other variables.”

YES, BUT DOES IT SAY anything about what they read?

That is, does slogging your way through something brainy like Proust or Rumi or Man’s Search for Meaning earn you a greater return in the ­longevity bank, or do you get just as much bang for your buck by ­diving into something less ­taxing like a Danielle Steel, or a Louis L’Amour or one of those ones where a remorseless Jack Reacher kills a man with a pickle fork (or, to clarify, uses a pickle fork to kill a man)?

This is important to me because I am currently involved in something called the Book Bash. It’s a fundraiser for the Victoria Literacy Connection, a non-profit group that helps those who struggle with literacy in its various forms.

The idea is that Literacy ­Connection supporters will spend August devouring books, gathering pledges from ­family and friends according to the number of pages they read. To promote this, 13 of us have been designated Book Bash champions, documenting our progress via social media posts.

Except this creates a couple of problems. First, not all pages are created equal. Some you breeze through like Ethics class at Trump U, while others are as slow-going as the Malahat on a summer Sunday ­afternoon. I started the Book Bash by ­tackling a copy of Mordecai Richler’s St. Urbain’s ­Horseman that had print so tiny it ­resembled a car-rental contract. It took two days to wade through three pages. I had to abandon the novel before A) I went blind and B) the Literacy Connection went broke.

Also, not all books are ­created equal, at least in perception. Going on social media to reveal your reading selections is like letting the neighbours peer into your recycling bin. (“I didn’t know they even made Baby Duck anymore,” they marvel. “And who knew it came in water-cooler-sized jugs?”) People get judgmental.

With that in mind, the temptation is to choose books that are the literary equivalent of date movies, the ones you go to when you’re still at the stage of the relationship where you’re trying to impress each another. Date movies are the deeply meaningful films — shot in black and white, subtitled, directed by someone like François Truffaut or Federico Fellini — that you endure when what you really want is to be in the theatre next door watching 60-year-old Tom Cruise light the afterburners and blast bogeys out of the sky again. If it weren’t for date ­movies, Fellini would have been reduced to picking pop bottles out of the ditch.

Same goes for books. When people ask what you read, the inclination is to name only the highbrow ones whose titles are proudly displayed from bookcases like medals of good citizenship, but that never actually leave the shelf until a particularly large spider invades the room. (Mark Twain’s definition of a classic: “Something that everybody wants to have read and nobody wants to read.”)

To name the books you truly enjoy, the ones that keep the bedside lamp lit at 3 a.m. and that, like a good dog, leave an aching void when they’re gone, is like confessing a fondness for bacon, or French fries, or anything other than qui… quin… sorry, it’s hard to type this ­without barfing… quinoa. Guilty pleasures, high in cholesterol, low in literary nutrition.

Which is why it was so gratifying to learn of the literacy/longevity connection, which as far as I can tell has ­nothing to do with whether the book is ancient Greek or early Grisham. ­Wasting my time ­reading another potboiler? No, I’m extending my life by 23 months, thank you very much.

Besides, any book that grips you so hard that you grip it right back, breaking its spine like the aforementioned Jack Reacher, is by definition a good read.

The Book Bash is a reminder: literacy is a gift, not an obligation. We read not because we feel we should, but because we can.

To learn more, go to victorialiteracyconnection.ca