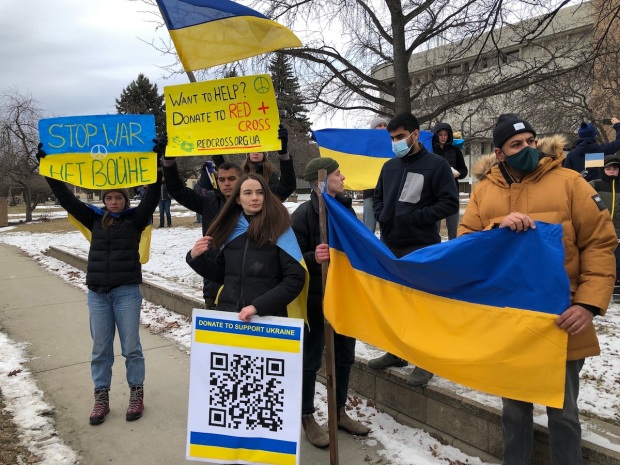 DO ANTI-WAR RALLIES accomplish anything, or do they just make us feel good?

In Kamloops on Saturday, rallies in support of Ukraine were held in front of the court house and at Riverside Park, about 60 people at one, some 300 at the other.

They carried placards that said Stand with Ukraine, Stop War, Make Peace Not War, Stop Putin and other slogans. Many waved or wore Ukrainian flags.

They made some speeches, chanted and marched. At the courthouse, drivers honked and waved as they went by. I heard one guy yell an anti-Putin vulgarity through his open car window.

But back to the question, do rallies make any difference? Kyiv, after all, is 8,432 km. from Kamloops.

Around the world, in New York, Tokyo, Prague, Israel, Paris, Berlin, they turned up by the hundreds of thousands.

So how does this help Ukraine as it defends itself against guns, tanks, bombs and missiles in the hands of the second-most powerful military force in the world?

I wondered this myself, but then I came across this tweet posted with the StandWithUkraine hashtag. It says this:

“To the free people of the world. We feel your support. We see your demonstrations with our flags. We hear your chants. This helps us fight the horrific Russian evil. Ukraine holds the ground. We. Will. Not. Fail.”

It came among the hundreds of grisly tweets showing the devastation of war: destroyed convoys, bodies, defiant Ukrainian citizens standing up to Russian soldiers with nothing but their bare hands.

But somebody in Ukraine took the time to thank those who rally. All those rallies lift spirits and provide courage and resolve for those fighting for their country.

So, yes, rallying might seem a small thing to do, but it makes a big difference.

4 Comments on EDITORIAL – Do rallies supporting Ukraine make any difference?